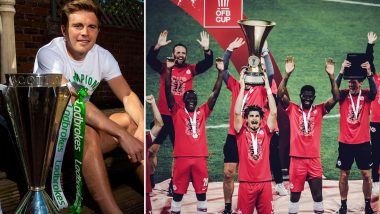 The coronavirus pandemic has brought the entire sporting world to a standstill as competitions have been either suspended or cancelled. But some kind of normalcy is returning as most of the major European leagues will resume by the end of the next month, be it behind closed doors. Although football without fans is an unusual sight, teams such as Celtic and RB Salzburg have given an idea of how to celebrate titles while maintaining social distancing protocols. Liverpool May Win English Premier League Title at Neutral Venue.

With Premier League, Serie A and La Liga all planning to resume third campaign questions were raised as of how the teams such as Liverpool who are guaranteed the domestic trophy will celebrate their win and in the meantime, Celtic and RB Salzburg have come up with unique ways to enjoy their success. Juventus Plan to Project Hologram of Cristiano Ronaldo and Team Onto Empty Stadium Once Serie A Returns.

Celtic who recently won their ninth successive Scottish Premiership title after the league was cancelled due to the pandemic celebrated the occasion with their fans. The club streamed a virtual party on Celtic TV, Youtube, Facebook and Twitter handle throughout the day where several players thanked them for their effort.

Meanwhile, the SPL trophy went on quite a tour as the club while adhering to social distancing dropped it off on the doorstep of their players.

Speaking of RB Salzburg, the club won the Austrian Cup on Friday by defeating SC Austria Lustenau in the finals. While receiving the trophy, the players could be seen maintaining the necessary protocols. The Salzburg players stood on a large mat which had circles on it for the players to stand in so they could safely lift the trophy together.

I get it, but is it not a complete waste of time considering they've just spent 90 minutes on the field together and will probably celebrate again in the changing rooms? pic.twitter.com/myjP13aR1Y

Unlike the Scottish league, EPL, Bundesliga, Serie A and La Liga are all planning to complete the season by playing all the scheduled games, winners of the respective competitions might look to celebrate their title the way Salzburg did it.

(The above story first appeared on LatestLY on May 30, 2020 08:57 PM IST. For more news and updates on politics, world, sports, entertainment and lifestyle, log on to our website latestly.com).