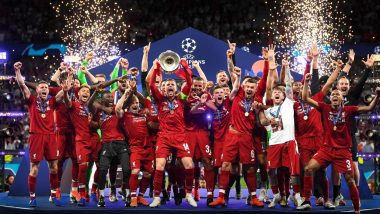 London, May 29: It could still be a possibility that runaway English Premier League leaders Liverpool will end up winning the title at a neutral venue, as per a BCC report. The national lead for football policing, deputy chief constable Mark Roberts has said up to six games could be moved at the request of local police forces. "We have reached a consensus that balances the needs of football, while also minimising the demand on policing," said Roberts as quoted by BBC. "The majority of remaining matches will be played, at home and away as scheduled, with a small number of fixtures taking place at neutral venues, which, contrary to some reports, have yet to be agreed.

"The views and agreement of forces which host Premier League clubs have been sought and where there were concerns, the Premier League has been supportive in providing flexibility in arranging alternative venues where requested. English Premier League Table-Toppers Liverpool Disappointed by Mayor’s Comments on Ending Current Season.

"This plan will be kept continually under review to ensure public health and safety and a key part of this is for supporters to continue to respect the social distancing guidelines, and not to attend or gather outside the stadiums," he added.

The Premier League is set to resume on June 17, subject to government approval. Liverpool lead the Premier League table by 25 points with nine games remaining as they chase their first title in 30 years.

(The above story first appeared on LatestLY on May 29, 2020 11:56 PM IST. For more news and updates on politics, world, sports, entertainment and lifestyle, log on to our website latestly.com).