Cristiano Ronaldo has been scoring for Juventus ever since he has joined the team earlier this year. 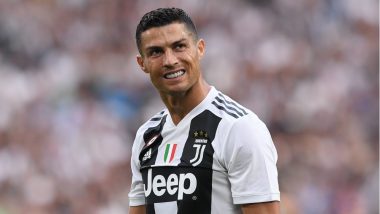 Cristiano Ronaldo has been scoring for Juventus ever since he has joined the team earlier this year. Ronaldo started off slow as he could not score in the first three matches of Juventus but broke the dry spell by scoring a goal against Sassuolo. So far he has scored seven goals in 10 matches in Serie A including the recent match against Empoli in which he had played a vital role in the victory of Juventus. With this, CR7 equalled a 60-year-old record in just three months made by Welshman John Charles in the 1957-58 campaign for the Old Lady. 'I Was No Longer Indispensable' at Real Madrid, Says Ronaldo.

Talking about Juventus’ match against Empoli, CR7 scored a couple of goals. The first one was scored via a dodgy penalty and the second one was quite a special one. The goal was fired from 25 meters away and is touted to be the most brilliant goal since his stint with Juventus. Check out the video below:

Talking about the Serie A table, Juventus is on number one with 28 points. The team has played 10 games so far and has won nine and lost none. One of them ended up with a draw.  The number two spot is occupied by Inter Milan who is not very far from Juventus with 22 points. Napoli holds the third spot with 22 points. Talking about CR7, the Portuguese footballer broke his nine-year-long stint with Real Madrid and joined Juventus in July 2018.

(The above story first appeared on LatestLY on Nov 02, 2018 10:20 PM IST. For more news and updates on politics, world, sports, entertainment and lifestyle, log on to our website latestly.com).