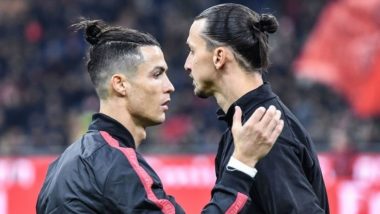 Cristiano Ronaldo and Zlatan Ibrahimovic will resume their age-old rivalry when AC Milan and Juventus face each other at the San Siro Stadium on Tuesday (July 7, 2020). The two teams met each other last month in the semi-finals of Coppa Italia, but the Swedish striker was not part of that clash as he was injured at the time. However, the 38-year-old is now fully fit and will meet his old foe for possibly the last time Italy. AC Milan vs Juventus, Serie A 2019–20: Cristiano Ronaldo, Zlatan Ibrahimovic and Other Players to Watch Out in MIL vs JUV Football Match.

Zlatan Ibrahimovic, who rejoined AC Milan in January during the winter transfer window, played his first match for the club since March last week when they travelled to Lazio. The striker' impact was imminent as he scored the second in Rossoneri’s 3-0 win over the title contenders. AC Milan have looked a better side since the Swede’s arrival but his future at the club is in doubt due to the rising tensions between him and Milan hierarchy. Zlatan Ibrahimovic Reportedly Has Heated Confrontation With AC Milan CEO Ivan Gazidis.

As per reports, there has been a fallout between the former Sweden international and AC Milan CEO Ivan Gazdis as the striker is unhappy with the way the club is being run in recent times. It is understood that the 38-year-old is considering leaving the cub once the season concludes. Zlatan Ibrahimovic Targeted By Serie B Side AC Monza, Could Team Up With Former Milan Chief Silvio Berlusconi.

Zlatan Ibrahimovic recently bought shares in Hammarby FC, a club in his home country of Sweden, and there are reports suggesting that the 38-year-old could join them once his spell at Milan comes to an end. And with the striker's departure from Rossoneri’s seemingly imminent, this could be the last time the greats face each other in Italy.

The two players are in fine form at the moment and have been among the goals in recent matches. The Swedish striker scored against Lazio on his return from injury while the five-time Ballon d'Or winner became the first Juventus player in 60 years to score 25 league goals after his strike against Torino.

Cristiano Ronaldo and Zlatan Ibrahimovic have shared a great rivalry over the years, with both of them adamant on proving that they are better than the other. Now as the two gear up to face each other for possibly the last time, at least in Italy, goals can be expected as both the greats will be eager to guide their respective teams to all three points.

(The above story first appeared on LatestLY on Jul 07, 2020 06:44 PM IST. For more news and updates on politics, world, sports, entertainment and lifestyle, log on to our website latestly.com).