The Portugal and Juventus star has been a highly successful player with a trophy-laden career, winning a total of 32 titles while playing for Manchester United, Real Madrid and presently, Juventus. He has also won five Ballon d'Or trophies and has two international titles to his name. 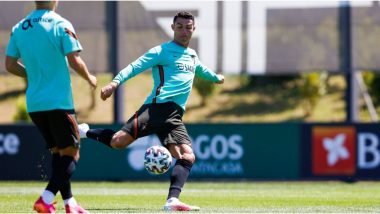 Cristiano Ronaldo is someone whom football fans associate a lot with trophies and medals. And why not? The Portugal and Juventus star has been a highly successful player with a trophy-laden career, winning a total of 32 titles while playing for Manchester United, Real Madrid and presently, Juventus. He has also won five Ballon d'Or trophies and has two international titles to his name. But the star forward has now revealed the most important trophy that he has won till date. Cristiano Ronaldo Says ‘My Body is My Weapon’ in his Latest Instagram Post (Watch Video)

"The start of the UEFA European Football Championship 2016 was going well for me but then I was sad because I got injured [in the final vs France]," Ronaldo said, adding, "By the end of the match I was crying with happiness! I experienced three types of feelings and emotions in that game, but at the end of the day it was unbelievable what I felt!"

"It is probably the most important trophy that I’ve won in my life," the 36-year stated while talking about the most important title he has won so far. He then went ahead and spoke about the best goal he has scored in his 777 career goals. And it was while playing for Real Madrid against his current side Juventus in the quarter-finals of the 2017-18 Champions League. Cristiano Ronaldo Prepares for Spain vs Portugal Football Friendly Ahead of UEFA Euro 2020 (See Pics)

The 36-year old left jaws dropping when he scored from a spectacular overhead kick with Juventus keeper Gianluigi Buffon being rooted to his spot in goal. “As you know, I have scored 777 goals in my career," he said, adding. "It is a bit unlucky but unfortunately, I have to mention that I scored my favourite ever goal against my current team, Juventus, and past my great friend Gianluigi Buffon! I would say that is my best and favourite goal that I’ve ever scored in my career."

Ronaldo also spoke about winning the upcoming Euro 2020, "It was very emotional. To win it again would be incredible, and of course, we go to the tournament with that as our ambition. We have a good team but also we know there are a lot of very strong teams there.” Portugal would play Spain tomorrow in a friendly match and then take on Israel on June 10, before beginning their Euro 2020 campaign against Hungary on June 15.

(The above story first appeared on LatestLY on Jun 03, 2021 02:51 PM IST. For more news and updates on politics, world, sports, entertainment and lifestyle, log on to our website latestly.com).