Cristiano Ronaldo to Rub Shoulders With Lionel Messi at Barcelona? Fans Doubt If This Would Come True! (Read Tweets) 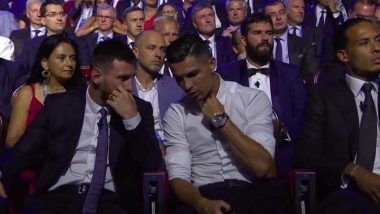 For a while now, Cristiano Ronaldo has linked with various clubs including PSG after Juventus got ousted at the Champions League 2019-20. Now here’s another report that has been making rounds on social media about the five-time Ballon d'Or rubbing shoulders with Lionel Messi at Barcelona. The fans are taken aback by the same and say that the move looks impossible. On one hand there were a few fans of Ronaldo and Messi said that they were waiting for both of them to share the dressing room and the others were stunned. Cristiano Ronaldo in Barcelona Jersey: Fan-Made Images & HD Wallpapers of the Portuguese Superstar in Red and Blue Will Leave You in Splits!

Juventus has been at the receiving end after Ronaldo scored twice in the Round of 16 against Lyon which was held at the backyard of the Bianconeri. The team lost on away goals and thus their campaign ended in the Champions League. Ever since the netizens and a few football pundits are of the opinion that CR7 should quit Bianconeri. Now, let's have a look at the tweets below:

Messi and Ronaldo playing together needs to happen, even if its just a one off charity game or something.

But together at Barcelona? Yeah that ain't happening 😂https://t.co/E3LR2awfoS

Imagine the two playing together

Cristiano Ronaldo has been offered to Barcelona as Juventus look to reduce their gigantic wage bill.

Imagine if we had just one season of Cristiano and Messi playing together. 🤞

Argentina look poised to offer Ronaldo citizenship and pave the way for him to join Barca..

Hahahahaha wow! Now that’s the most ridiculous rumour I’ve heard! He wouldn’t do that to Madrid! Be like going to city over United!

Ronaldo has also been linked to his former club Real Madrid. Ronaldo had broken his nine-year-long stint with his former club to make way into Juventus in 2018. Now it would be interesting to see if he would leave Juventus to join another club.

(The above story first appeared on LatestLY on Aug 13, 2020 05:12 PM IST. For more news and updates on politics, world, sports, entertainment and lifestyle, log on to our website latestly.com).