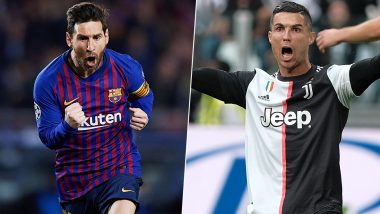 Cristiano Ronaldo scripted history last night with his brace as he became the only player to score more than 50 goals across Serie A, La Liga and EPL. The Allianz Stadium had witnessed an amazing game between Juventus and Lazio. The two teams battled it out and the hosts walked away with the last laugh winning the match 2-1.  With a couple of goals last night he not only put Juventus on the brink of winning their ninth title but also became the first player to score 30 goals in one season. Of course, this was the right opportunity for the fans to once again dig up with the debate of Cristiano Ronaldo vs Lionel Messi. Cristiano Ronaldo Breaks a Few Records With His Brace During Juventus vs Lazio, Serie A 2019-20 (Watch Video).

Ronaldo fans took a dig Lionel Messi who finished the La Liga 2019-20 season scoring 25 goals. Messi also won the Pichichi Award 2019-20 which is bestowed to the highest goal scorer of the season. The debate about who between the two started again on social media and Ronaldo fans took a jibe at Lionel Messi and gave their reason about who between the two is better.  Check out the tweets below:

Messi, when he sees #CristianoRonaldo trending for all the good reasons.. pic.twitter.com/GBQo60nFyd

Difference between Ronaldo and Messi...!

Messi is like a China product, famous by world wide but works only at FC Barcelona

After watching goal ..i can surely say that #CristianoRonaldo is much better player than messi.. pic.twitter.com/hi2YyctN1m

Like if you remember this statement from Messi 😂🤣 #CristianoRonaldo pic.twitter.com/p5rgmTh1Xh

Ronaldo is greater than Messi any day and that’s it #CristianoRonaldo pic.twitter.com/hNElSG5aCT

Juventus will be next hosted by Udinese on July 23, 2020 and the team would be hoping for winning the next game too. Now,  coming back to the article, do feel free to comment on who between the two is better.

(The above story first appeared on LatestLY on Jul 21, 2020 11:24 AM IST. For more news and updates on politics, world, sports, entertainment and lifestyle, log on to our website latestly.com).