The Brazilian right-back also said that he loves Ronaldo because of his work ethics and his contribution to the sport. Earlier, the former Catalan defender revealed that Ronaldo is the toughest opponent he has ever faced in his life. 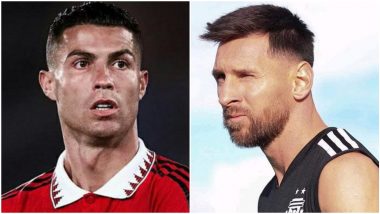 Former Barcelona star Dani Alves has stressed that he relates more with Cristiano Ronaldo than his former club mate Lionel Messi. He also said that he 'loves' Ronaldo and enjoyed the rivalry with the Portuguese superstar during their tenures at Barcelona and Real Madrid respectively. Alves spent almost eight years at Camp Nou following a transfer move from Barcelona in 2008. A year later, Ronaldo also arrived at Barcelona's archrivals Real Madrid from Manchester United. Since then both players faced off against each other during El Clasicos as Alves was given the task to stop Ronaldo on the left wing. Dani Alves Calls Cristiano Ronaldo a 'Bastard', Names Portuguese Star as 'Toughest Opponent Ever'

However, both Ronaldo and Alves have left La Liga and now the former Catalan player has talked about the relationship with the Manchester United forward. In a podcast, Alves said: "I identify with him, because everything I did in my life was based on work. As a player, I'm closer to Cristiano than Messi. I can relate with CR7, because of work."

The Brazilian right-back also said that he loves Ronaldo because of his work ethics and his contribution to the sport. While talking about the rivalry with the former Real Madrid talisman, Alves added: 'I love Cristiano. Now we're no longer at Barca or Madrid, I can speak as it always seemed like I couldn't." Earlier, the former Catalan defender revealed that Ronaldo is the toughest opponent he has ever faced in his life. He also called the Portuguese a 'bastard' as the former Madrid star used to give him a tough time on the pitch.

(The above story first appeared on LatestLY on Sep 26, 2022 01:03 PM IST. For more news and updates on politics, world, sports, entertainment and lifestyle, log on to our website latestly.com).