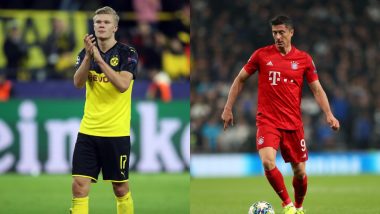 Borussia Dortmund and Bayern Munich will hope to extend their perfect run post the COVID-19 halt when they face each other in a potential title-deciding clash on Bundesliga 2019-20. Bayern Munich lead the Bundesliga points table with 61 points from27 games. But Dortmund, who has scored seven times without conceding any in their last two matches, can cut down the gap to within one point with a win at home against the defending league champions. Meanwhile, fans searching for all the tips and team suggestions to pick the best team for the DOR vs BAY clash in 2019-20 Bundesliga, should scroll down for all information. Bundesliga 2019–20 Live Football Streaming on Hotstar: Watch Free Live Telecast of Top Flight German League on TV in India.

Both sides have been in fantastic form since the restart after a two-month break and with Bundesliga being the only major European league in action, all eyes from across the world will be on both teams when they step out at the Signal Iduna Park on Tuesday. Bayern though will be without defensive midfielder Thiago Alcantara while centre-back Jerome Boateng is expected to return into the playing XI as should Serge Gnabry. For Dortmund, captain Marco Reus has been ruled out for the season but Jadon Sancho could make his first start post the break while Mats Hummels, who limped off with an Achilles problem against Wolfsburg, is also expected to return.

Borussia Dortmund vs Bayern Munich, Bundesliga 2019-20, Dream11 Team Prediction: Goalkeeper – Bayern captain Manuel Neuer (BAY) has more experience of big matches and should be picked as the goalkeeper for this clash. But Roman Burki (DOR) has also shown enough promise for Dortmund and can be made the custodian.

Borussia Dortmund vs Bayern Munich, Bundesliga 2019-20, Dream11 Team Prediction: Midfielders – Julian Brandt (DOR) and Thorgan Hazard (DOR) have run Dortmund’s midfield for the last two matches and should be automatic picks. Raphael Guerreiro (DOR) is another Dortmund player who can be picked. They will be joined by Joshua Kimmich (BAY).

Borussia Dortmund vs Bayern Munich, Bundesliga 2019-20, Dream11 Team Prediction: Forwards – Erling Braut Haaland (DOR) and Robert Lewandowski (BAY) will be the two forwards. Both running for the Bundesliga golden boot and both in scoring form.

Robert Lewandowski (BAY) should be appointed the captain for this fantasy team as he is the best player among all in these two teams and has already scored 27 times this season. Dortmund’s Julian Brandt (DOR) has shown the ability to rise on the big occasion and can be made the vice-captain. Haaland (DOR) is also another option for the vice-captain’s role.

(The above story first appeared on LatestLY on May 26, 2020 11:16 AM IST. For more news and updates on politics, world, sports, entertainment and lifestyle, log on to our website latestly.com).