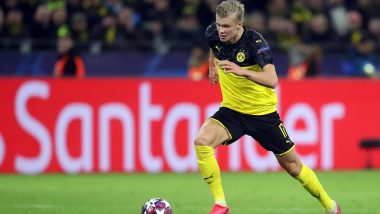 RB Leipzig had taken a sly dig at Erling Haaland ahead of their game against Borussia Dortmund. But little did they know that their jibe would backfire so badly as the Yellow and Black Army won the game 2-0 with Haaland scoring a couple of them. Thus after the match, he even gave a befitting reply to jibe. Hosted at the backyard of Leipzig, the team was quite confident of their win but sadly things didn't turn out as expected by the hosts. Borussia Dortmund not only won the game but also broke Leipzig's 13-match long winning streak. Coming back to the story we are talking about so before the match, Leipzig posted featuring Timo Werner. Erling Haaland’s Brace Against RB Leipzig Leads Borussia Dortmund to 2-0 Win, Netizens Hail 19-Year-Old (Watch Video).

In the snap, we see Timo resting his fingers behind his ears. Usually, this gesture comes after the goal celebration. But it was the caption of the snap which actually caught the attention of the netizens which read, "Haa- WHO?" It wasn't rocket science to decode that the jibe was meant for the 19-year-old Borussia Dortmund player Erling Haaland. The visitors also waited and did not respond immediately.

But once the match was over, Dortmund had a befitting reply to the tweet with a video of Erling Haaland. The Norwegian player scored a couple of goals during the game and with this, they sealed a win. Check out what Haaland had to say.

(The above story first appeared on LatestLY on Jun 21, 2020 11:42 PM IST. For more news and updates on politics, world, sports, entertainment and lifestyle, log on to our website latestly.com).