Euro 2020, Group F: A Look at France's Strength, Weakness and Chances At This Year's European Championship

World champions France have one of the strongest squads of the 24 teams set to participate in the 2020 European Championships. Didier Deschamps faces an embarrassment of the riches when it comes to picking up the playing eleven with the Les Bleus comprising of two-star names for every position on the pitch. 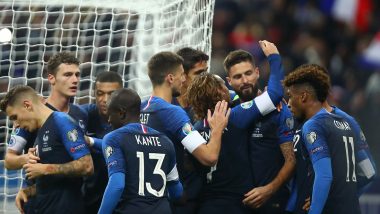 World champions France have one of the strongest squads of the 24 teams set to participate in the 2020 European Championships. Didier Deschamps faces an embarrassment of the riches when it comes to picking up the playing eleven with the Les Bleus comprising of two-star names for every position on the pitch. In the last edition, France were unlucky to lose the finals to Portugal after dominating every team for the majority of the campaign. They would be eager to learn from those mistakes and add to their tally of two cups. Let us analyse the French team ahead of the European Championship. Euro 2020 Schedule in IST, Free PDF Download: Get Fixtures, Time Table With Match Timings and Venue Details of Football Tournament.

France’s strength lies in the presence of star names in the squad like Kylian Mbappe, Paul Pogba, Antoine Griezmann, NGolo Kante and Raphael Varane. The returning Karim Benzema adds more firepower to the attack and it is these big-game players who can make the difference when it matters the most. Karim Benzema, Kylian Mbappe, Antoine Greizmann, Clement Lenglet & Ousmane Dembele Included in France’s 26-Member Squad for Euro Cup 2021.

Skipper Hugo Lloris has not had the best of the season in England with Tottenham Hotspur and he will be under a bit of pressure. With 124 appearances for the Les Bleus, Hugo Lloris has an abundance of experience but bad form can hamper the best of players. There is no goalkeeper currently to challenge his place in the team which makes this area their Achilles heel.

France know if they play to their potential, they have a real chance of lifting back-to-back major international honours. There is a sense of stability about them with their core members like Pogba, Kante and Mbappe playing a key role in the team.

Germany and defending champions Portugal are in the same group as France and both are capable of defeating the best on any given day. France will try and avoid a situation where they are left with too much to do at the last moment, in order to progress.

The French side make football look like an art and it will be a real surprise if they do not make at least the top 2 in the tournament.

(The above story first appeared on LatestLY on Jun 03, 2021 11:15 PM IST. For more news and updates on politics, world, sports, entertainment and lifestyle, log on to our website latestly.com).