Europa League 2020-21 Quarter-Final Draw: Time, Teams, Rules and Everything You Need to Know Ahead of Knockouts 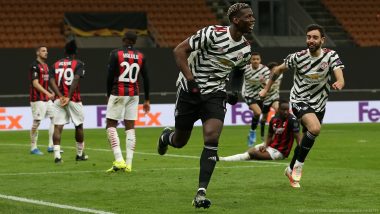 Manchester United was the last team to qualify for the Europa League 2020-21. They played against Zlatan Ibrahmimovic's AC Milan at the San Siro and they won on the aggregate of 2-1 to make way into the quarter-finals of the Europa League. It was Paul Pogba's heroics that led the team to a stunning 1-0 at the San Siro last night. Even Arsenal played against Olympiacos in the round of 16 matches. Paul Pogba Scripts Perfect Tale of Comeback From Injury, Frenchman Sends AC Milan Out of Europa League 2021 as Manchester United Makes Way Into Quarter-Finals (Watch Video).

Talking about the Europa League 2020-21 quarter-finals a couple of teams from England have qualified for the round of eight. One team from Italy has made it to the quarter-finals. In this article, we shall bring to you everything you need to you about the much-awaited quarter-final games.

When is the 2020-21 Europa League Quarter-Final Draw and Where to Watch It?

The 2020-21 Europa Draw will take place at the UEFA headquarters in Nyon, Switzerland on Friday (March 19, 2021) and is scheduled to start at 04:30 pm IST (Indian Standard Time) and 11:00 am GMT (06:00 am ET). The draw will be telecasted live on Sony Ten 2 and Sony Ten 2 HD channels in India. SonyLiv, the OTT platform of Sony Sports will stream the draw live along with the UEFA Champions League's official website.

Which Teams Have Qualified For 2020-2021 Europa League Quarter-Final?

A total of eight teams, two from England and Spain, one each from Italy, Netherland, quarter-finals. The following teams have qualified for the last eight

Unlike the Round of 16 draws, there are no seeding in place and the country protection won’t apply at this stage as well. So no team can be drawn against any side irrespective of whether have already played in the group stages or are from the same national association.

As of now, we are waiting for the draws of the Europa League 2020-21. The schedule of the same will be announced today.

(The above story first appeared on LatestLY on Mar 19, 2021 01:28 PM IST. For more news and updates on politics, world, sports, entertainment and lifestyle, log on to our website latestly.com).