Sevilla defeated Ujpest 3-1 in the second leg of their 2018-2019 Europa League second-round qualifier to win 7-1 on aggregate and claim a spot in the third round. 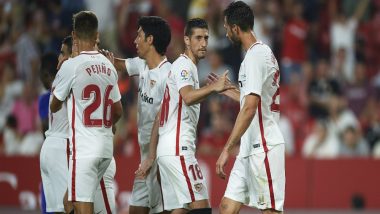 Budapest, Aug 3: Sevilla defeated Ujpest 3-1 in the second leg of their 2018-2019 Europa League second-round qualifier to win 7-1 on aggregate and claim a spot in the third round.

The hosts, anxious to put behind them the 0-4 humiliation they suffered in Spain, sought to control the contest from the opening whistle here on Thursday, reports Efe news agency.

Sevilla, with the job all but done, were ready to cede possession against an Ujpest side they had little reason to fear. Even so, it was the visitors who created the first chance of the night, as Pablo Sarabia redirected Ever Banega's corner to Daniel Carriço, unmarked at the near post, but Ujpest goalkeeper Pajovic easily handled the resulting header.

The closest Ujpest came to scoring in the first half was a miscue by Mercado that left the ball at the feet of Nagy, but the Argentine defender recovered in to divert the Hungarian's shot away from the target.

With 10 minutes to go before the break, an Escudero cross found Pablo Sarabia at the far post and he put the ball past Pajovic to make it 1-0 on the night and 5-0 on aggregate.

Ujpest opened up in the second half, creating more space at the back for Sevilla to exploit, and Sarabia got his second of the match in the 50th minute. Zsoter salvaged some pride for the home side with a goal in the 77th minute, only to see Luis Muriel get a third for Sevilla with seven minutes left in regulation.

(The above story first appeared on LatestLY on Aug 03, 2018 02:58 PM IST. For more news and updates on politics, world, sports, entertainment and lifestyle, log on to our website latestly.com).