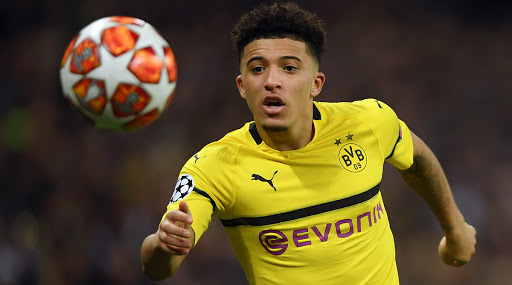 Manchester United are in pole position to obtain the services of Borussia Dortmund star Jadon Sancho according to various reports emerging from England. European league’s transfer window is currently closed but with January approaching fast, the rumors begin to surface and the ‘Sancho transfer Saga’ has taken a new turn as the Red Devils have emerged as favorites to sign the young English prodigy. The 19-year-old forward currently plays for German heavyweights Borussia Dortmund, who are locked in a three-team title race in their domestic league as they are in third position and five points behind leaders Monchengladbach. Man Engages in ‘Racist Gesture’ During Manchester City vs Manchester United Premier League 2019–20 Football Match, Arrested by British Police.

According to The Mirror, Manchester United are in the front-running to acquire the signature of former Manchester City youth academy player Jadon Sancho. The Englishman is enduring a tough season in Germany after bursting on to the scene last year. Sancho has faced disciplinary action after returning late from international duty as the forward was left out from the squad by Coach Lucian Favre for a match against Bundesliga leaders Monchengladbach, which Dortmund won 1-0. The youngster was also substituted early in the first half during the Bayer Munich clash, in which his side were hammered 4-0. After having a fallout with the coach, Sancho is seriously considering leaving the club at the turn of the year. Football Transfer Updates: Real Madrid All Set to Offer Two Stars in Exchange for Paul Pogba.

Along with Manchester United, fellow Premier League teams Chelsea, Manchester City and Liverpool are also in the race to sign the young forward. Mirror has also claimed that the ‘Red Devils’ are interested in signing Tottenham Hotspur playmaker Christian Eriksen in the upcoming transfer window. The Danish international’s preferred destination is Spain but Spurs might look to cash in on the midfielder in January instead of losing him for free in summer.