France is placed in Group C of FIFA World Cup 2018 with Australia, Peru and Denmark. 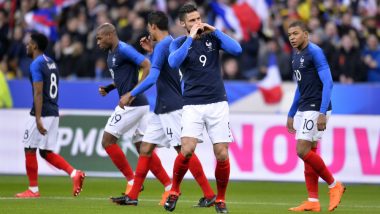 The French football team has such an abundance of talent at its disposal such that head coach Didier Deschamps has to think more about whom to drop then whom to start within the playing eleven. The 2016 Euro Cup finalist has its share of detractors who mount undue pressure on the squad to deliver taking into account the wealth of talent present. They have been consistent enough barring a few wobbles in the World Cup qualifiers which can be neglected. Les Bleus have announced the 23-man world cup squad with manager Didier Deschamps naming France team lineup headlined by Manchester United man Pogba. FIFA World Cup 2018 Schedule in IST for PDF Download: Fixtures, Groups, Time Table with Match Timings & Venue Details of Football WC in Russia.

The loss of Laurent Koscielny has been a huge blow whose World Cup dreams vanished with an Achilles tendon injury while playing for Arsenal. His absence could well see the emergence of Adil Rami back in the French scheme of things. Raphael Varane and Samuel Umtiti are two of the world’s best defenders and the expectations are sky high from them. Hugo Lloris will continue to be the French no 1 keeping out longtime backup Steve Mandanda.

The midfield boasts of the like of Paul Pogba, N’Golo Kante, Blaise Matuidi and Corentin Tolisso who has had a brilliant season with Bayern Munich in Germany. Euro 2016 hero Dimitri Payet is fighting for a World Cup place. The French attack is where their firepower lies with Antoine Griezmann and Olivier Giroud, the certainties upfront. They will be flanked by wonder kid Kyllian Mbappe and Ousmane Dembele and their pace and skills will come in handy. The trio of Anthony Martial, Kingsley Coman and Alexandre Lacazette will play the role of backup.

The French football team was part of Group A of the European 2018 World Cup qualifiers and finished top of the group with 23 points to book a place in Russia. They won 7 games out of 10 with Olivier Giroud and Antoine Greizmann grabbing four goals each in the qualifiers. Sweden who finished behind France edged them out 2-1 at home to be the only team to defeat France in the qualifiers.

The French topped their group with convincing wins over Switzerland (5-2) and Honduras (3-0) and a goalless draw with Ecuador. They defeated Nigeria in the round of 16 before getting knocked out to eventual winners Germany 1-0 courtesy a Matts Hummels 12th minute header.

Antoine Greizmann: His supreme eye for the goal makes him Les Bleus most important player and his goalscoring form in Spain has helped Athletico Madrid consolidate in the league as well as reach the highs in the Europa League. He has an extremely capable squad that will help provide him with the chances which Greizmann can capitalize on.

Kyllian Mbappe: He has been compared to Thierry Henry with his style of play and this young 19-year-old PSG forward his making heads turn with his game. Blessed with astonishing speed and incredible finishing, this could very well turn out to be his World Cup.

France is placed in Group C of FIFA World Cup 2018 with Australia, Peru and Denmark. France will be playing three international friendly matches before beginning with the World Cup finals. The three games are the Republic of Ireland vs France on May 28, France vs Italy on June 6 and France vs the USA on June 9. Les Bleus will play their first league match of FIFA World Cup 2018 against Australia on June 16.

(The above story first appeared on LatestLY on May 21, 2018 06:52 PM IST. For more news and updates on politics, world, sports, entertainment and lifestyle, log on to our website latestly.com).