It’s not often that goalkeepers get themselves on the score sheet but Chivas goalkeeper Antonio Rodriguez has added his name to the list. Antonio scored this goal in CD Guadalajara's Mexican Primera Division match against bottom club Veracruz. This was Rodriguez’s first goal of his professional career. 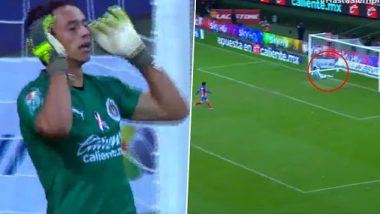 It’s not often that a goalkeeper gets himself on the score sheet but Chivas goalkeeper Antonio Rodriguez has added his name to the list. Antonio scored this goal in CD Guadalajara's Mexican Primera Division match against bottom club Veracruz. Collecting the ball near his goal in the 94th minute of the game, Antonia saw his Veracruz counter-part Sebastian Roca at the halfway line as the keeper had pushed forward with his team desperate for a goal. Rodriguez grabbed this opportunity and hoofed the ball upfield and after a few bounces, the ball ended in the back of the net. Veracruz defender chased down the clearance but was unable to stop the goal. Paulo Dybala Goal Video Highlights: Juventus Striker Scores Stunning Free Kick Against Atletico Madrid in Champions League, Twitterati Hail Argentine.

Chivas came back into the match to take a 2-1 lead after going a goal down in the first half. Alan Pulido scored a brace to put his side ahead during the finals minutes of the game. Veracruz were awarded a set-piece deep into stoppage time and their keeper Sebastian Roca came forward in search of a goal. However, they were unable to make this opportunity count and Antonio Rodriguez decided to go alone and score as he kicked the ball from his own box into the empty opposition net.

This was Rodriguez’s first goal of his professional career. The Chivas keeper has represented Mexico in the U-17, U-20 and U-23 divisions. He was also a part of the Mexican squad that won a gold medal in the 2012 London Summer Olympics. This 3-1 win has moved Guadalajara in 10th place on the points table, while Veracruz still remain rock bottom.

(The above story first appeared on LatestLY on Nov 27, 2019 01:39 PM IST. For more news and updates on politics, world, sports, entertainment and lifestyle, log on to our website latestly.com).