Germany vs Netherlands, Euro 2020 Qualifiers Live Streaming & Match Time in IST: How to Get Live Telecast of GER vs NED on TV & Football Score Updates in India 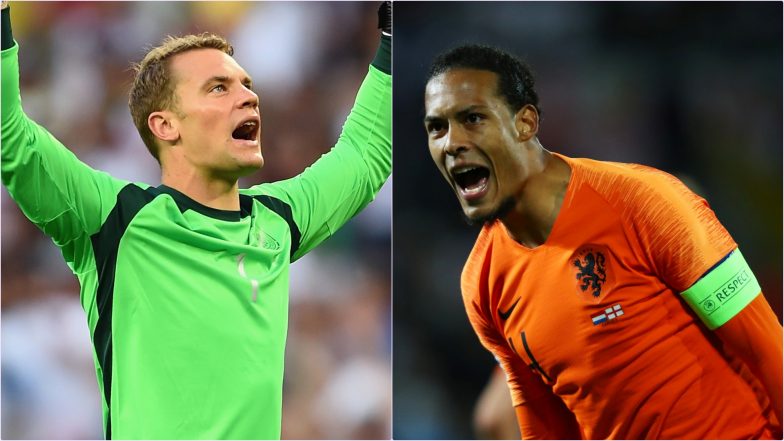 Germany vs Netherlands, UEFA Euro 2020 Qualifiers Live Streaming: Germany and Netherlands have a historic rivalry in football, and the two nations clash in Hamburg in a Euro 2020 qualifier where stakes are quite high. 2014 World Champions Germany will be eager to dethrone Northern Ireland at the top of the table with a win tonight. For the Netherlands, their progress to the Nations League final was a success, but they lost the summit clash against Portugal and sit third in the group table though they have a game in hand. On the whole, the two sides have been faltering for quite a while now and must improve in order to repeat the highs of yesteryears.

Germany will be without the services of Leroy Sane, Julian Draxler, Leon Groetzka for the tie which leaves them short in attack. Timo Werner will have the responsibility of leading the German offence with the likes of Marco Reus and Serge Gnabry providing the pace and vision in midfield. Toni Kroos is an experienced man in the middle of the park and his form for Real Madrid in the opening games of the season has been excellent. Skipper Manuel Neuer will continue to guard the goal for the team with a relatively inexperienced bunch of defenders.

Ronald Koeman has the luxury of picking what is probably the best centre-back pairing in world football at the moment – Matthijs De Light and skipper Virgil Van Dijk. Barcelona man Frenkie De Jong will start as the sweeper with Memphis Depay and Georginio Wijnaldum in the attack. Ryan Babel has found a new lease of life in the Holland setup and is expected to start up top. Steven Bergwijn has been a delight to watch with his club PSV Eindhoven, and a lot is expected of this youngster going forward.

What is Germany vs Netherlands, Euro 2020 Qualifiers Schedule? Date, Time and Venue Details

Germany will take on the Netherlands on late Friday night on September 6 in India. The Euro 2020 Qualifiers football match will start at 12.15am IST (Indian Standard Time) at Volksparkstadion, Soccer-specific stadium in Hamburg, Germany.

Germany vs Netherlands, Euro 2020 Qualifiers will be available via live stream on SONY LIV app and JIO TV.

The two sides have some big match players tailor-made to start on occasions like these and will most likely cancel each other out to share the spoils.