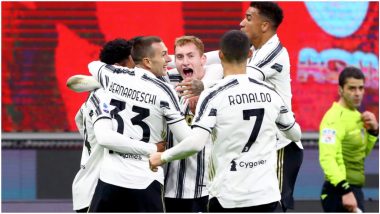 Juventus will play Napoli in the Supercopa Italiana 2021 final on January 21 with both teams eyeing to grab the first trophy of the season. Juventus come into this match after a 0-2 defeat at Inter Milan, which ended their four-match winning streak across all competitions. Andrea Pirlo’s men will be desperate to defeat Napoli and clinch their first trophy this season. Napoli are unbeaten in their last three matches and come after clashing Fiorentina 6-0. Meanwhile, fans searching for how and where to watch the Juventus vs Napoli, Supercopa Italiana final should scroll down for all details. Cristiano Ronaldo Leaves for Città del Tricolore Ahead of Juventus vs Napoli, Supercoppa Italiana Finals (See Pics).

Juventus vs Napoli clash in the Supercoppa Italia 2021 will be played at the Citta del Tricolore Stadium in Reggio Emilia. The match will begin at 01:30 am IST (Indian Standard Time).

Unfortunately, fans in India cannot watch the live telecast of the Supercoppa Italia final on television channels. Live Streaming will also not be available but fans should keep a watch on the Serie A page, which might live stream the final clash.

(The above story first appeared on LatestLY on Jan 21, 2021 12:01 AM IST. For more news and updates on politics, world, sports, entertainment and lifestyle, log on to our website latestly.com).