Iran will face Turkey in a friendly game on May 29 and then travel to Austria to take on Greece in another friendly match on June 2 before they begin their FIFA World Cup 2018 campaign placed in Group B. 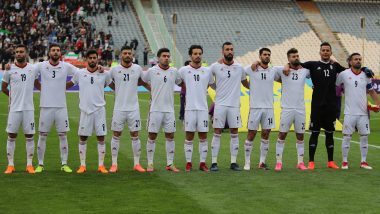 Iran is one of the leading footballing nations of Asia, and this was not the case a few years back. But the arrival of former Manchester United assistant coach Carlos Queiroz has turned them into warriors on the pitch. If there is one team that can advance to the knockout phase of FIFA World Cup 2018 from Asia, it is the Iranians as they never seem to play an open game. His reign has had his controversies, but the Portuguese coach is known to stand up for his player which makes them a close-knit group. Iran national football team aka Team Melli coach has announced his 24-man squad for the 2018 World Cup, and that calls for a discussion about Iran’s team lineup. FIFA World Cup 2018 Schedule in IST for PDF Download: Fixtures, Groups, Time Table with Match Timings & Venue Details of Football WC in Russia.

Young defender Saeed Aghaei has been drafted into the starting eleven off late and has taken his chances well and should make the cut along with Vouria Ghafouria, Mohammad Khanzadeh and Rouzbeh Chesmi. Alireza Beiranvand will be the Iranian first choice goalkeeper in Russia and his 1.95m meter frame means he will be a commanding presence in their box.

The bulk of the attacking is pinned on Alireza Jahanbakhsh who scored 21 goals in the Dutch League for AZ Alkmaar. Sardar Azmoun is another young talented forward and has a host of English clubs like Wolves, Everton and Leicester City tracking his progress. For many, he is the Iranian “Messi” and the best young player of Asia. One controversial issue is the inclusion of Masoud Shojaei in the provisional squad who was last year given a life ban by the Iranian authorities after he made an appearance against an Iranian club. If the veteran midfielder makes it to the final 23, it will be his third World Cup appearance.

Iran finished top of Group A of the Asian World Cup Qualifiers 2018 with 22 points and along with South Korea clinched the automatic qualification berth. They were, in fact, the first team to qualify for the 2018 FIFA World Cup from Asia. Sardar Azmoun was the top scorer for Iran in the qualifiers with four goals.

Iran was placed in Group F in Brazil along with Bosnia and Herzegovina, Argentina and Nigeria. They could only manage in their three matches with a draw against Nigeria while Argentina and Bosnia were too good for them losing out 1-0 and 3-1 to them.

Sardar Azmoun: The Iranian forward is blessed with lightning quick pace and an eye for goal has grabbed 23 goals in 31 outings for Iran making him their fifth all-time top goal scorer. He can play as a second striker or in an attacking midfielder role, and a good World Cup is certain to earn him a place in a top European club.

Alireza Jahanbakhsh: It is not often an Asian player makes to the top of goal scoring chart in a European league, but Alireza Jahanbakhsh has been able to achieve it in the Netherlands with AZ Alkmaar. His exploits have helped his club confirm a Europa League spot next season, and his task in Russia is simple-to take Iran out of the group stage.

Before flying off to Russia, Team Melli will stop in Istanbul where they are holding a training camp. Iran will face Turkey in a friendly game on May 29 and then travel to Austria to take on Greece in another friendly match on June 2 before they begin their FIFA World Cup 2018 campaign placed in Group B. Iran will play Morocco on June 15 in their first match. The next two games are against Spain on June 20 and Portugal on June 25.

(The above story first appeared on LatestLY on May 22, 2018 04:27 PM IST. For more news and updates on politics, world, sports, entertainment and lifestyle, log on to our website latestly.com).