This Day, That Year: When Lionel Messi Inspired Barcelona to 4–0 Win Over Bayern Munich in 2008–09 UEFA Champions League Season 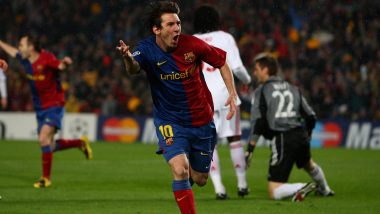 On this day (April 8) in 2009, Barcelona hosted Bayern Munich in the first leg of the quarter-finals of the UEFA Champions League and an enthralling display in the first-half put them in the touching distance of third semi-final appearance in four years. The Catalan giants inspired by Lionel Messi were brilliant on the night as they put four past the record German champions as Jurgen Klinsmann’s men looked like a shadow of themselves. ‘Vintage’ El Clasico on the Cards? Barcelona and Real Madrid Legends Agree for a Charity Match.

Barcelona started the match on the front foot and their early pressure was rewarded as a quick interchange between Dani Alves, Xavi and Samuel Eto’o put Messi through on goal and the Argentine put the Spaniards in front. Barcelona’s number 10 then returned the favour as he set up Eto’o three minutes later to double their advantage. The Spanish side were already 2-0 up inside the first 15 minutes but they didn’t let took their foot off the pedal as they wanted more. Lionel Messi Quitting Barcelona Would be no Drama For La Liga Claims President Javier Tebas.

Pep Guardiola’s men continued to play silky football and assert their dominance over the Germans. Bayern held firm but their resilience was once again broken when great work by Thierry Henry on the wings set up Lionel Messi for an easy tap in. The Argentine then teed up Henry to make it 4-0 for Barcelona and seemingly finished the tie after just one half.

The tempo dipped slightly in the second half as Bayern worked hard on their team structure and were adamant to not let Barcelona get another goal. After the game ended, Bayern midfielder Mark van Bommel brushed aside his team’s chances in the reverse fixture as he said ‘Perhaps if they only bring eight men to Munich then we have a chance.’

(The above story first appeared on LatestLY on Apr 08, 2020 06:59 PM IST. For more news and updates on politics, world, sports, entertainment and lifestyle, log on to our website latestly.com).