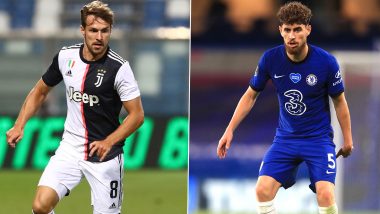 Juventus are looking to strengthen their squad for next season and boss Maurizio Sarri is hoping to bring in his old favourite, Jorginho, in the summer. The Italian manager is a big fan of the midfielder and thinks that he can help the Binconeri continue their dominance in Italy as well as in Europe. Sarri won his first domestic league title in Itlay as the Black and Whites were crowned champions for ninth successive time. Juventus Secure Ninth Straight Serie A Title Following 2–0 Over Sampdoria (Watch Goal Highlights).

According to a recent report from TMW, Juventus are preparing to bring Jorginho back to Italy and are looking to include former Arsenal star Aaron Ramsey in a swap deal. The Welsh midfielder arrived in Turin earlier this season but has failed to impress manager Sarri and could be a part of an exchange deal with Premier League side Chelsea. Juventus in Talks With Chelsea Midfielder Jorginho Over Potential Transfer.

Maurizio Sarri has managed Jorginho during his spells at Napoli and Chelsea and is once again looking to link-up with the midfielder. The 28-year-old was the main controller for Sarri in Naples and then brought the Italian footballer with him to the Blues. However, a turbulent season saw the 61-year-old leave the Premier League side after just one season.

Jorginho joined Chelsea for £57 million in 2018 and has become one of the most integral part of Frank Lampard’s set up. The Italian, however, was left out of the starting XI for a few matches post lockdown, but in recent weeks has regained his place in the Blues midfield.

If Juventus manage to sign Jorginho it could boost the team’s morale even further as the Bianconeri’s lack a proper controlling midfielder in their squad. The vision and creativity of the 28-year-old from midfield will result in more goal-scoring opportunities for the Italian club’s strikers, which has been the main issue for them this season.

(The above story first appeared on LatestLY on Jul 27, 2020 04:52 PM IST. For more news and updates on politics, world, sports, entertainment and lifestyle, log on to our website latestly.com).