Juventus versus Barcelona is a standout clash in Europe this week with both sides eager to go three points clear at the top of the points table. Andrea Pirlo’s tactical acumen is bound to be tested when he comes up against a Barcelona side, who despite their struggles boasts of some of the biggest names in world football. 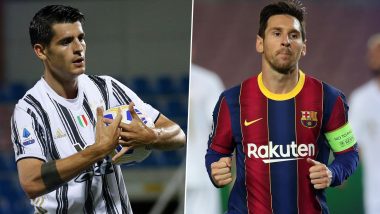 Juventus versus Barcelona is a standout clash in Europe this week with both sides eager to go three points clear at the top of the points table. Andrea Pirlo’s tactical acumen is bound to be tested when he comes up against a Barcelona side, who despite their struggles boast of some of the biggest name in world football. There is no denying of the turmoil at Barcelona with their President resigning in addition to their skipper rarely looking motivated in the pitch. Ronal Koeman has a job to do in Turin and he will need his men to rise up to the occasion. BAR vs JUV Champions League 2020-21 Dream11 Team Selection: Recommended Players As Captain and Vice-Captain, Probable Lineup To Pick Your Fantasy XI.

Ahead of the Juventus versus Barcelona game, we take a look at the players to watch out for in the clash.

The Welshman has found a new lease of life under manager Andrea Pirlo after being on the brink of exit from the club when Maurizio Sarri was around. He is dynamic and has the ability to play key passes, something Barcelona’s under-confident stars will want to avoid at the moment. Juventus vs Barcelona, UEFA Champions League Live Streaming Online: Where to Watch CL 2019–20 Group Stage Match Live Telecast on TV & Free Football Score Updates in Indian Time?

He was supposed to rise and reach the levels of Cristiano Ronaldo or Lionel Messi post winning the 2018 World Cup with France but it has been just downhill ever since for the French footballer. An injury to Phillipe Coutinho has opened up a no 10 slot for him and it is one that he must grab with both hands.

He has the big task of filling in for the quarantined Cristiano Ronaldo and the Spanish international has 3 goals to his credit already since returning to Turin. He needs the likes of Aaron Ramsey and  Rodrigo Bentancur to provide him with services to latch on to though.

The Barcelona skipper must rise up to the levels expected of him else Barcelona could be in a spot of bother this season. With Josep Bartomeu gone, it just might be the motivation Lionel Messi needed to get back to hi usual self. He is playing in an unfamiliar forward role but his ability to drop deep and pick up a game-changing pass is second to none in the world.

With Matthijs de Light and Giorgio Chiellini missing, Juventus defender Leonardo Bonnuci will have to the calming influence in their backline. Barcelona like to draw out their opponents and this is where the experienced Italian centre back can showcase the qualities he possesses.

Juventus and Barcelona have players that like to attack from the onset but with so much at stake, it might not be an open affair.

(The above story first appeared on LatestLY on Oct 28, 2020 05:04 PM IST. For more news and updates on politics, world, sports, entertainment and lifestyle, log on to our website latestly.com).