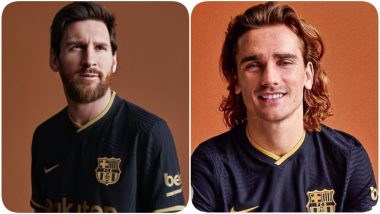 The La Liga 2019-20 season has come to an end with Real Madrid being the champions of Spanish tournament. With the season coming to an end, the teams have started releasing their jerseys. Now a while ago, Barcelona launched their away jersey bathed in black and gold. Little did the Catalan Giants know that the fans would be quick enough to point out the similarities between the jersey of Barcelona and Kaizer Chief. Barcelona shared the pictures of Lionel Messi and Antoine Griezmann donning the away kits on social media. Designed by Nike, the brands said that it was highly inspired by the electric night in Barcelona. Lionel Messi, Antoine Greizmann & Others Return to Practice Ahead of Barcelona vs Napoli, Champions League 2019-20 (See Pics).

Along with the black and gold shirt, the kit had back shorts paired with black socks. The socks have Barca and the club badge in gold. The jersey is made from recycled polyester from plastic bottles. Gerard Piqueue was seemingly happy with the fresh design. However, the fans sounded extremely disappointed with the fact that the jersey had a similar design to South Africa's club, Kaizer Chief.

The netizens took to social media to post their reactions about the same. you can check out the jersey by Barcelona and the reactions below:

Nike has failed you on this one because @KaizerChiefs had this jersey for their 50th birthday celebration pic.twitter.com/ngqwZg05sS

Barcelona has already started preparing for the Champions League 2019-20. Players like Lionel Messi, Antoine Greinzmann and others have started sweating it out for the much-awaited contest against Napoli on August 7, 2020.

(The above story first appeared on LatestLY on Jul 31, 2020 07:55 PM IST. For more news and updates on politics, world, sports, entertainment and lifestyle, log on to our website latestly.com).