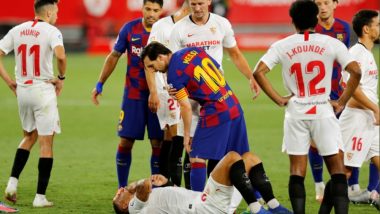 Lionel Messi has been looked in great shape ever since Barcelona’s return after coronavirus break. The Catalan Giant could not secure a win last night against Sevilla and the match ended with 0-0 draw. However, Messi was in the news for something negative as he pushed and allegedly slapped Sevilla's Diego Carlos during the match. However, the six-time Ballon d'Or winner escaped red or a yellow card and thus this left the fans fuming. A few of them said that image Cristiano Ronaldo or Sergio Ramos doing this, they would surely get red or at least a yellow. Lionel Messi Reportedly Dedicates 699th Goal to Three Sons With his New Goal Celebration.

So here's what exactly happened. Diego Carlos launched an ugly tackle on Messi and this didn't go down well with the Argentine. As a result, he rushed to Carlos and pushed him. However, the over-exaggerated and delayed tumble did not help him and Messi saw no action from the referee. But the fans felt that the act by Messi did deserve an action. You can watch the video below and have the look at the tweets.

Messi got away with this. Astonishing that he wasn't even booked at all. Red card all day long.pic.twitter.com/1XdQ4jYbPt

yellow both ways, Messi for the act, Carlos for going down like he'd been shot

Talking about Barcelona, the team still stands on number one of the La Liga 2019-20 with 65 points winning 20 games out of 30. While five of them resulted in a draw, the Catalan Giants lost the remaining ones.  Barcelona will next play against Athletic Club on June 24, 2020, at the Camp Nou.

(The above story first appeared on LatestLY on Jun 20, 2020 09:14 PM IST. For more news and updates on politics, world, sports, entertainment and lifestyle, log on to our website latestly.com).