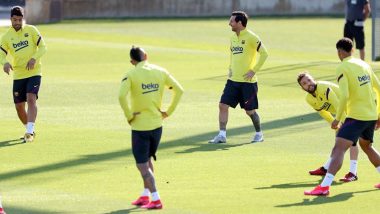 Lionel Messi has been in the news for the transfer rumours that have been grabbing the attention of the netizens almost every day. But beyond all the chaos Lionel Messi has been sweating it out in the nets for Barcelona's clash against Napoli which will take on Sunday, August 9, 2020. The Round of 16 will be held at the backyard of Barcelona in Camp Nou. Ahead of the match, the Argentine exhibited amazing footwork and chipped a goal while sweating it out in the nets along with his teammates. Lionel Messi Transfer News Update: Inter Milan Plan Sensational 2021 Move for Barcelona Superstar.

All eyes will be on the six-time Ballon d'Or winner who has been in the news for also lashing out at his team after the Catalan Giants lost the La Liga 2019-20 to Real Madrid. Messi has been unhappy with the Catalan Giants and the team heads to the Champions League tie amid the chaos in the camp. There have been reports of a rebellion against Lionel Messi in the Barcelona camp after his fall out with at least three mid-fielders who are looking to move out of the team. For now, let's have a look at the Messi's goal which was shared by the official account of Barcelona.

For now, Messi has been linked heavily with Serie A side Inter Milan. Messi has been unhappy with the management of Barcelona since a while now. On a couple of occasions, he has been so unhappy that he even took to social media and lashed out at the Catalan Giants.

(The above story first appeared on LatestLY on Aug 04, 2020 12:27 PM IST. For more news and updates on politics, world, sports, entertainment and lifestyle, log on to our website latestly.com).