Messi’s current deal at the club end in June next year and with him amidst a rift with the club’s top hierarchy, a deal looks far from possible at the moment. Inter are reportedly looking to try and take advantage of the conflict to lure Messi to Italy in response to Juventus signing Cristiano Ronaldo two seasons ago. 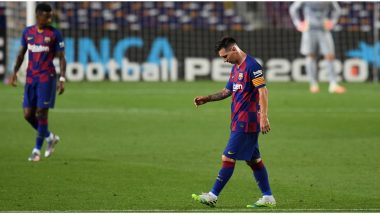 Lionel Messi could make a sensational move to Inter Milan suggests reports in the Italian media. The Argentine’s current contract at Barcelona runs out next summer and reportedly there have been no talks of an extension after Messi and his representatives stalled all discussions mid-way through negotiations last month. Inter are looking to take advantage of this breakdown in relationship to try and swoop the six-time Ballon d’Or winner to San Siro next summer with a mega-money deal. Messi failed to inspire Barcelona to a third successive La Liga title with Real Madrid clinching the trophy. Love Is in the Air! Lionel Messi's Wife Antonella Roccuzzo Kisses Him Sweetly on Cheek In Cute PDA Pics.

But despite the club’s disappointing performance, Mess individually enjoyed a great campaign and won the Pichichi award, given the league’s highest goalscorer, with 22 goals. He also topped the assist-making charts and created a new record with 21 assists in a single La Liga season. Messi became only the second footballer after former Barcelona teammate Xavi to record 20 or more assists in a single La Liga season. Lionel Messi Begins Preparation for Upcoming Season Amid Transfer Rumours From Barcelona (See Pic).

Messi’s current deal at the club ends in June next year and with him amidst a rift with the club’s top hierarchy, a new deal looks far from possible at the moment. Inter are reportedly looking to try and take advantage of the conflict to lure Messi to Italy in response to Juventus signing Cristiano Ronaldo two seasons ago. According to Italian newspaper Gazzetta dello Sport, Inter’s majority shareholders Suning Holdings are plotting a move for the 33-year-old and will try and prise him away from Camp Nou in the summer of 2021.

Reports of Messi’s father Jorge purchasing a new plush pad in the Italian capital and also moving his business to Italy from next month have further sparked rumours of a possible transfer in the future. Reports state that Inter are planning to offer the Argentine a deal worth £45.5million on a three-year contract. Another Italian outlet, Radio Rai, reported that Messi’s father purchased a home in Milan and is preparing for his son’s arrival to Italy sometime next year.

Reports of Messi’s transfer to Italy gained coverage after the Barcelona captain slammed his teammates on national television following Barca’s 1-2 home defeat to Osasuna in their penultimate league game. The result confirmed Real Madrid as the La Liga champions for 2019-20 season. Madrid won with a game and eight points ahead of Barcelona.

(The above story first appeared on LatestLY on Jul 25, 2020 09:17 PM IST. For more news and updates on politics, world, sports, entertainment and lifestyle, log on to our website latestly.com).