Messi reportedly believes that club president Josep Bartomeu and technical director Eric Abidal are incapable of restoring Barcelona to their glory days of recent past and is waiting for the new president to shake up the board before reconsidering his decision. The current board has spent millions on players but few have succeeded at Camp Nou. 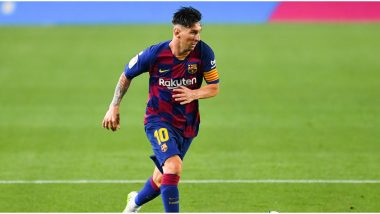 Lionel Messi’s alleged decision to break contract extension talks with Barcelona have come as shocking news to many. The Argentine, who joined Barcelona as a 13-year-old in 2001, reportedly halted any talks of a contract extension with the Blaugrana side and is reportedly looking elsewhere. Messi has been at Barcelona for 19 long years and has guided the club to numerous titles the most telling of which have been the treble wins in 2008-09 and 2014-15. But the Argentine is said to be looking elsewhere and has lost faith in the club and club hierarchy. Are Cristiano Ronaldo & Lionel Messi Time Travellers? Conspiracy Theory Comes Up After Doppelganger Photos Two of Football Stalwarts Go Viral.

Ever since the news broke out that Messi has stalled all contract talks, several theories and explanations have come out on why the six-time Ballon d’Or winner wants to leave the club. One, among those many theories, suggests that the Argentine see no future with Barcelona given their absurd planning and wasteful expenditure on the wrong players. Lionel Messi Transfer News Update: Manchester City Boss Pep Guardiola Refuses to Comment on Future Targets, Wishes for Argentine Star to Remain at Barcelona.

Messi reportedly believes that club president Josep Bartomeu and technical director Eric Abidal are incapable of restoring Barcelona to their glory days of recent past and is waiting for the new president to shake up the board before reconsidering his decision. The current board has spent millions on players but few have succeeded at Camp Nou with Philippe Coutinho and Antoine Griezmann the latest examples of players, who arrived with a big name and huge price tags on them but have failed to produce the goods.

Apart from spending the club money on the wrong players, the club is also embroiled in several controversies which has tarnished the reputation of this famous institution. The most recent controversy being that the president allegedly fed money to an online campaign to attack the players for their poor form and performance.

What, however, has hurt more is the success of Real Madrid. The Los Blancos have won four of the last six Champions League titles and are among Europe’s most successful teams in recent years. Barcelona have dominated the domestic leagues – they are two-time running champions of La Liga – but could lose the title this year with Madrid four points ahead with only three games remaining.

Unlike the past, when the club was possessed with signing only galacticos, Real Madrid have changed their club philosophy and have instead started signing talented younger players, who can develop and lead the club for many years in the future – something Barcelona were renowned for doing in the past.

Madrid did sign Eden Hazard last summer but the Belgian is still young and has many more years to give to the club. The other club signing includes a 17-year-old Vinicius Junior, Luka Jovic, Rodrygo and Brahim Diaz among others.

(The above story first appeared on LatestLY on Jul 11, 2020 02:44 PM IST. For more news and updates on politics, world, sports, entertainment and lifestyle, log on to our website latestly.com).