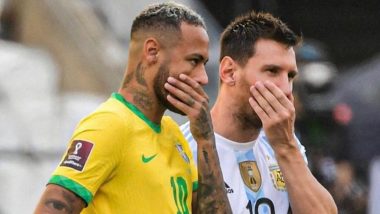 Lionel Messi has been included in South America's XI for the year 2021. Brazil's Neymar junior has also been included in the list. Messi in 2021 has won his seventh Ballon d'Or and has amassed 61 goals this year. However, what was shocking was that the likes of Alisson Becker, Roberto Firmino and Paulo Dybala have missed out on the list of South America's XI.  The year 2021 is almost coming to an end and we now have the best XI being drafted by the International Federation of Football History & Statistics. Lionel Messi Parties With Wife Antonella Roccuzzo & Kids, Posts Pictures on Social Media.

The Argentine had quite a great year in 2021 and even won a few titles. Lionel Messi in 2021 had even helped Barcelona win the Copa del Rey glory. With this, Messi was influential as Argentina won Copa America Trophy. Instead of Liverpool's Alisson Becker, Emiliano Martinez has been included as the goalkeeper of the team.  Four Brazilian players have made it to the team this includes Luis, Marquinhos, Neymar and Gabriel Barbosa. Chile defender Mauricio Isla has also been a part of the squad. Check out the full list below:

Talking about Lionel Messi, he got transferred from Barcelona to PSG earlier in 2021. As of now, he has just scored one goal for PSG in Ligue 1 2021-22. The fans are hoping for Messi's record to get better in the coming days.

(The above story first appeared on LatestLY on Dec 29, 2021 09:59 AM IST. For more news and updates on politics, world, sports, entertainment and lifestyle, log on to our website latestly.com).