Messi had won his seventh Ballon d'Or trophy, the most by any player in the history of the sport. His Ballon d'Or title win last year created a lot of stir as many had believed that Robert Lewandowski should have won it. 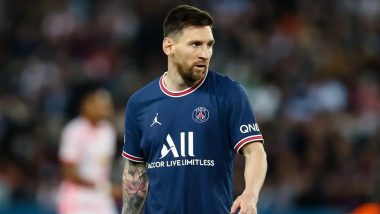 Lionel Messi has revealed his pick for the next Ballon d'Or winner. The Argentine star, who captured a record seventh Ballon d'Or trophy last year, believes that the trophy should be won by Karim Benzema this time. The Frenchman has had a sensational time this season as he guided Real Madrid to the La Liga and UEFA Champions League 2021-22 titles, scoring 44 goals in all competitions. Cristiano Ronaldo Reacts After Portugal’s 1–1 Draw Against Spain in UEFA Nations League Clash

What has been more impressive about him is his ability to turn things around for his side, helping them come back from difficult positions. Messi has a lot of experience playing against someone like Benzema when the former represented Barcelona in La Liga.

There was a lot of debate last year after Messi won the title pipping Robert Lewandowski, who was one of the favourites. But this time, there is likely to be no debate if Benzema ends up securing the Ballon d'Or title.

(The above story first appeared on LatestLY on Jun 03, 2022 04:32 PM IST. For more news and updates on politics, world, sports, entertainment and lifestyle, log on to our website latestly.com).