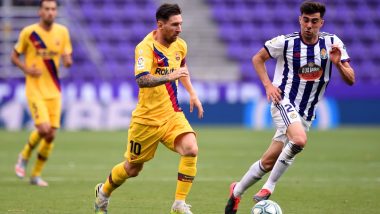 Lionel Messi became the first player in La Liga history to record 20 goals and as many assists in a single season when he set up Arturo Vidal for the only goal of the game in Barcelona’s 1-0 win over Real Valladolid on Saturday. This is the first time in his career that Messi has registered 20 league assists in a single La Liga season equaling former Barcelona teammate Xavi’s record. Xavi, who called time on his Barca career in 2015, was the only La Liga player to record 20 assists in one season and he had achieved it in the 2008-09 season with Messi joining his former teammate with a marvellous pass for Vidal to score. Lionel Messi Leaving Due to Barcelona’s Faltering Future Plans, Says Report.

The Argentine teed up Vidal for the opening goal in the 15th minute after Riqui Puig had a shot saved moments earlier as Barcelona dominated the proceedings. They couldn’t, however, add to the scoreline and Vidal’s strike proved to be the decisive one taking Barcelona just one point behind Real Madrid in the La Liga 2019-20 points table. Barcelona are second on the standings with  79 points after 36 matches while Real are a point ahead with also a game in hand. Lionel Messi Transfer News Updates: January 2021 Will Give Indication About Argentine’s Future, Says Victor Font.

While Messi became the first player, after Xavi in 2008-09, to record 20 assists in a single La Liga season, he is the second in Europe’s top-five leagues to score 20 and also assist 20 times in the league in the same season. Former Arsenal and Barcelona striker Thierry Henry had achieved that feat for Arsenal in 2002-03 when he scored 24 goals and also assisted 20 times in the Premier League.

The Argentine, however, has three league games in hand and could overtake the Frenchman to become the first player the 21st century to record more than 20 goals and also over 20 assists in a single league campaign.

He currently leads the La Liga charts for most goals as well as assists. Messi has scored 22 times this La Liga season and is four goals ahead of the next best challenger Karim Benzema while his 20 league assists also take him 10 clear of Real Sociedad forward Mikel Oyarzabal who has 10 assists to his name.

(The above story first appeared on LatestLY on Jul 12, 2020 08:45 AM IST. For more news and updates on politics, world, sports, entertainment and lifestyle, log on to our website latestly.com).