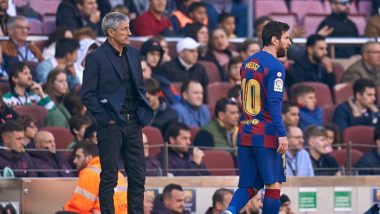 Barcelona played their last game against Celta Vigo a couple of days ago and the match ended with 2-2 draw. Now the result has ruffled the Catalan Giants star Lionel Messi and the draw was so hard for the six-time Ballon d’Or winner to digest that he went to the management of the team and reportedly asked them to sack their manager Quique Setien. Messi wants the appointment of Xavi or Pep Guardiola. Before the comeback of the La Liga 2019-20, Barcelona was leading the La Liga 2019-20 points table and was expected to win the tournament. Lionel Messi Shares Throwback Photo From Childhood, Recounts Love and Affection From Family to Overcome Each Challenge (See Pic).

But, with Real Madrid winning the matches, things have been different and they are now leading the points table with 71 points. Barcelona now has 69 points. Now the difference has ruffled the six-time Ballon d'Or winner and thus he had reportedly asked the management to sack the current manager. Setien has made way into the team the Catalan Giants went on to sack their previous manager Ernesto Valverde.

The sacking of Ernesto had created a lot of rift between Lionel Messi and the club as their sporting director Eric Abidal had blamed the players and said that they were unhappy with him (Valverde). Messi had taken to social media and had slammed him and said that he shouldn't be speaking without taking names. Talking about Barcelona, the team will next play against Atletico Madrid on July 1, 2020, at the Camp Nou and would be hoping to win the game to reduce the five-point gap between the team and Real Madrid.

(The above story first appeared on LatestLY on Jun 29, 2020 10:49 AM IST. For more news and updates on politics, world, sports, entertainment and lifestyle, log on to our website latestly.com).