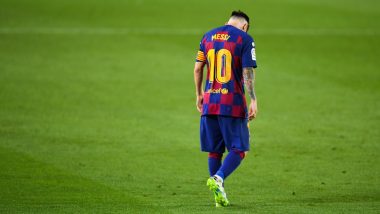 Barcelona, July 19: Brazil full-back and former Barcelona star Dani Alves feels that Lionel Messi is justified to be angry with the current situation at the club. The Catalan giants lost their two-year grip on the La Liga title when Real Madrid sealed their 34th win with a 2-1 victory over Villareal.

Barcelona have lost six games in the league this season and currently sit seven points behind Real. A visibly frustrated Messi said after they lost 2-1 to 10-man Osasuna at home that they have been "an erratic and weak team" throughout the season.

"When the team loses, it's normal he gets angry, he always wants to win. Just like me. We always want to win.

"He's been doing what he does for so long, he knows when a team gives one thing and when it gives another. That's why he says what works and what doesn't because he knows.

"He's spent so many years at Barca, experienced so many things, and he knows exactly what the team needs to win. He sees, what I feel, a lack of support," he said.

Messi is the top scorer in the league with 23 goals and also tops the assist table by a significant margin with 20. While Real Madrid's Karim Benzema is only two goals behind him on the goalscorer's list, the 33-year-old Argentine is the runaway leader on the standings for assists, with the closest man being Real Sociedad's Mikel Oyarzabal on 11.

Messi alone has thus been directly involved in 43 of the 81 goals that Barca have scored this season.

"I'll always say that Messi is the main course and we were the perfect ingredients for that plate. Now I have the feeling that he's doing everything, all the time, and we must remember he's only human," said Alves.

(The above story first appeared on LatestLY on Jul 19, 2020 12:49 PM IST. For more news and updates on politics, world, sports, entertainment and lifestyle, log on to our website latestly.com).