Lionel Messi will be leaving Paris Saint Germain next summer. The Argentine has a contract with the club until 2023. It is understood that the Argentine skipper is attracted by Major League Soccer (MLS) and will sign for Inter Miami FC next summer. 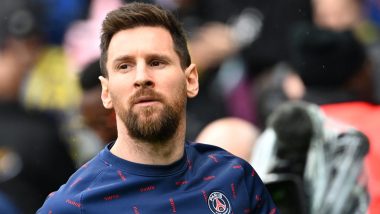 Lionel Messi's first season at Paris Saint Germain hasn't been the best. The Argentine won the Ligue 1 trophy with the Parisian giants but failed to produce his best performances on consistent bases. The 35-year-old arrived at the French outfit last summer but there are already rumours of him leaving them after his contract ends. Lionel Messi Transfer News: Barcelona President Joan Laporta ‘Not Considering’ Argentine’s Return To Camp Nou.

According to a report from DIRECTV Sports, Lionel Messi will be leaving Paris Saint Germain next summer. The Argentine has a contract with the club until 2023. The 35-year-old has reportedly decided to fulfil his current deal with the Paris outfit and then move on. Lionel Messi Meets TikToker Khaby Lame During PSG's Tour in Qatar (Watch Video).

It is understood that the Argentine skipper is attracted by Major League Soccer (MLS) and will sign for Inter Miami FC in the summer of 2023. Former Manchester United and Real Madri star, David Beckham, is the co-owner of the club.

The seven-time Ballon d'Or winner is said to buy 35 per cent shares in the club and sign for them when his contract at Paris Saint-Germain expires at the end of next season.

The American league has been one of the top destinations for top footballers in recent years. MLS has attracted many great players who are nearing the end of their careers.

Inter Miami also have a number of stars at their disposal as Gonzalo Higuain and Blaise Matuidi play for the MLS outfit. It is reported that Lionel Messi's former Barcelona team-mate Sergio Busquets could also be on his way to join the Miami based club.

(The above story first appeared on LatestLY on May 17, 2022 10:30 PM IST. For more news and updates on politics, world, sports, entertainment and lifestyle, log on to our website latestly.com).