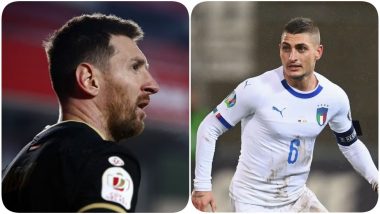 Paris Saint Germain players have been provoking Barcelona by commenting on Lionel Messi’s transfer. First, it was Neymar Jr who has spoken about how keen he was for playing with Lionel Messi. Post this it was PSG sporting director Leonardo Paredes and Angel di Maria also spoke about how keen he was for getting Messi on board. Now, the latest player from PSG was Marco Verratti is the latest player to speak about getting the Argentine on board. In an interview, he said that he would love to play with Messi. Verratti further explained he would give away the ball to Messi and Neymar and sit back watching the two play together. Lionel Messi Transfer to PSG? Before Retirement Angel Di Maria Hoping to Play Alongside his Compatriot.

“Of course I would like to play with Messi. I would give him and Neymar the ball and sit back and watch a little bit. It would be amazing to have him with us, another present for me from football,” he said during an interview. With statements like these, Ronald Koeman has been absolutely annoyed and has touted the comments to be disrespectful. The Barcelona manager further had asked UEFA and FIFA to intervene.

(The above story first appeared on LatestLY on Feb 09, 2021 04:59 PM IST. For more news and updates on politics, world, sports, entertainment and lifestyle, log on to our website latestly.com).