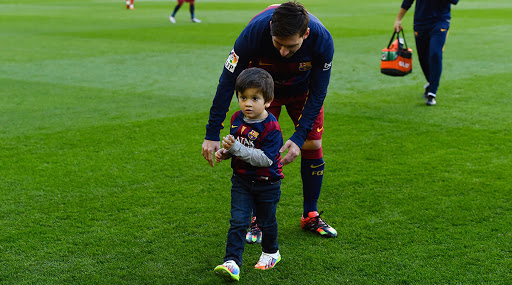 Football certainly runs in the veins of the Messi Family as Lionel Messi’s eldest son Thiago scored a brilliant goal for Barcelona in a recent friendly match and the video has gone viral on social media. Thiago is just seven years old but is clearly showing some similarities with his superstar father, who is widely regarded by many as the greatest player of all time. Thiago was born in 2012 and is already displaying his attacking instincts on a football field as he scored this wonderful goal for Barcelona’s youth team. Lionel Messi Rebukes Teammates for Silly Mistakes After Atletico Madrid Stun FC Barcelona 3–2 in 2020 Spanish Super Cup Semi-Final.

Thiago, Lionel Messi’s oldest son scored a brilliant goal for Barcelona’s youth teams and the video has gone viral on various social media websites. The Argentine superstar has already said on more than one occasions that he will not force his kids to play football however the eldest one might have his priorities clear. People in football are always searching for the ‘next Messi’ and by the looks of the skills Thiago possesses, they might not have to look far. He didn’t have to get past any defenders like his dad often does but showed great pace and composure in front of the goal to score. Very much unlike his father, the young kid finished the goal with his right foot, choosing to strike it across rather than curl it with his left foot. Barcelona Forward Luis Suarez Set to Undergo Knee Surgery, Could Miss Up to Six Weeks.

Speaking of Lionel Messi, the Argentine and Barcelona suffered a heart-breaking loss against Atletico Madrid in the semi-finals of the Supercopa de Espana 2019-20 on Friday. They will be next in action against Granada on January 19, 2020, in a La Liga encounter and will look to put this disappointing loss behind them.