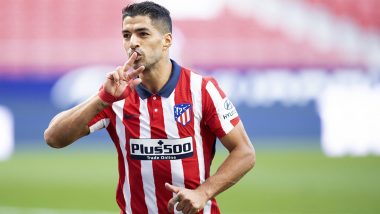 Luis Suarez has made a brilliant start to his career at Atletico Madrid as the Uruguayan striker managed to a brace and an assist in his first game for the Spanish capital side. Los Rojiblancos got their La Liga 2020-21 campaign underway on Sunday at the Wanda Metropolitano with a 6-1 win against Granada. The 33-year-old only earlier this week completed his move to Atletico Madrid from Barcelona on a free transfer. Luis Suarez Completes Transfer to Atletico Madrid, Uruguayan Striker Signs Two-Year Contract.

Atletico Madrid started their new footballing season against Granada but all the eyes were on Luis Suarez, who surprisingly picked the Spanish side as his new destination despite him being linked with a move to Juventus. However, the Uruguayan impressed on his debut for the Los Rojiblancos, scoring and providing goals in just over twenty minutes of play.

Starting the match on the bench, Luis Suarez came on in the 70th minute of the game for Diego Costa, who opened the scoring in the game. And just a couple of minutes into his debut for the Spaniards, Luis Suarez provided an assist for Marcos Llorente, who slotted the ball past the Granada keeper to make it 4-0.

After setting up a goal, it was time for Luis Saurez to get one for himself and the 33-year-old did just that as Marcos Llorente returned the favour as the Uruguayan scored from his cross. Then in the added time, the former Barcelona man got his second on the night, as he slotted the rebound past the keeper after his initial shot came off the goal post.

With this win, Atletico Madrid have made it clear that they mean business this season as they have already scored more goals than any other team in the league, with only Valencia managing the similar number in three games.

This brace move Luis Suarez second in the race for the coveted Pichichi Trophy as only Jose Luis Morales of Levante has scored more goals than the Uruguayan. Diego Costa, Joao Felix, Angel Correa and Marcos Llorente scored the other goals for Atletico Madrid.

(The above story first appeared on LatestLY on Sep 27, 2020 10:06 PM IST. For more news and updates on politics, world, sports, entertainment and lifestyle, log on to our website latestly.com).