UEFA satted they found the Premier League side guilty ‘overstating its sponsorship revenue in its accounts and in the break-even information submitted to UEFA between 2012 and 2016’. However, CAS in their verdict on Monday (July 13, 2020) said that City ‘did not disguise sponsorship contributions but did fail to cooperate with the UEFA authorities’. 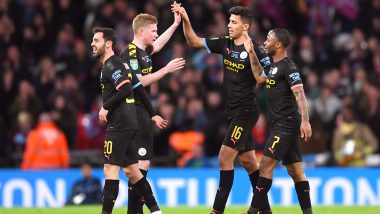 Manchester City will be able to play in the 2020-21 Champions League season after their two-year ban from European competition was lifted on Monday (July 13, 2020) by the Court of Arbitration for Sport (CAS). The former Premier League champions were punished by UEFA in February for breaking the Financial Fair Play rules as they were banned from continental competitions. After the verdict went in City's favour, football fans raised questions about the FFP regulations. Manchester City Two-Year Ban Lifted by CAS, Eligible to Play in UEFA Champions League 2020–21.

Manchester City were handed a two-year ban from European competitions and were given a fine of €30m but after the ruling on Monday, the suspension was overturned and the fine was reduced to just €10m. In their initial statement, UEFA said they found the Premier League side guilty ‘overstating its sponsorship revenue in its accounts and in the break-even information submitted to UEFA between 2012 and 2016’. Pep Guardiola Unsure About Manchester City Future As Catalan Manager’s Contract Expires in 2021.

However, CAS in their verdict stated that City ‘did not disguise sponsorship contributions but did fail to cooperate with the UEFA authorities’. Though the verdict is great news for City fans, several others have raised questions about UEFA’s inability to properly enforce the FFP rule. Here are some of the reactions.

FFP is a Joke

Manchester City will be playing in the UCL next season is an actual joke, FFP is a myth and the whole system is corrupted.

Everything in our hands now, it's calm, we move.

Shouldn't Be a Surprise

How the hell did Man City get away with it again, football is so corrupt it’s untrue @BBCSport @GaryLineker @ManCity

FFP just proved to us that no matter what happens, money can get you out of trouble. Just another reason why i hate @ManCity @UEFA

If you have Arab people , Don’t worry you will win 😉💙#ManchesterCity pic.twitter.com/r0BtXR4GKN

With the ban lifted, Manchester City will play in the upcoming Champions League, which is troubling news for Chelsea, Leicester City and Manchester United. As the three teams are involved in a race for UCL qualification but only two of them could finish in the top four and secure their place for the continental competition.

(The above story first appeared on LatestLY on Jul 13, 2020 03:53 PM IST. For more news and updates on politics, world, sports, entertainment and lifestyle, log on to our website latestly.com).