The Argentine Aguero netted a dramatic 94th-minute, often dubbed as the "93:20" winning goal against Queens Park Rangers on the final day of the 2011-12 season that gave City the Premier League title. 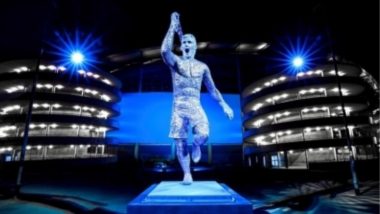 London, May 13 (IANS) Manchester City on Friday unveiled a permanent statue of legendary Sergio Aguero at Etihad Stadium on the tenth anniversary of the Club's first Premier League title and the iconic '93:20' moment. Aguero, who was recently inducted into the Premier League Hall of Fame, won fifteen major trophies during his time at the club, including five Premier League titles, one FA Cup, and a record six League Cups. Paul Pogba Transfer News: Juventus Favourites To Sign Manchester United Midfielder.

The Argentine Aguero netted a dramatic 94th-minute, often dubbed as the "93:20" winning goal against Queens Park Rangers on the final day of the 2011-12 season that gave City the Premier League title.Reflecting on his statue, Sergio Aguero who visited the Etihad Stadium on Friday said, "Truthfully, it is a very beautiful thing for me, to see myself 10 years ago is very moving. In those 10 years, I was able to win a lot of trophies and was able to help the Club become one of the most important in the world.""I am very grateful to the Club for making this statue in recognition of my football career in Manchester. It is something very special," said Aguero, who scored a club-record 260 goals. The 33-year-old Aguero switched to Barcelona last season but retired in December because of a heart problem. Situated on the east side of the Etihad Stadium, the large-scale statue of Aguero was created by award-winning sculptor Andy Scott and has been constructed using thousands of welded pieces of galvanised steel. At night, Aguero's statue and those of Kompany and Silva will be specially illuminated with blue-tinted lighting.

(The above story first appeared on LatestLY on May 13, 2022 08:39 PM IST. For more news and updates on politics, world, sports, entertainment and lifestyle, log on to our website latestly.com).