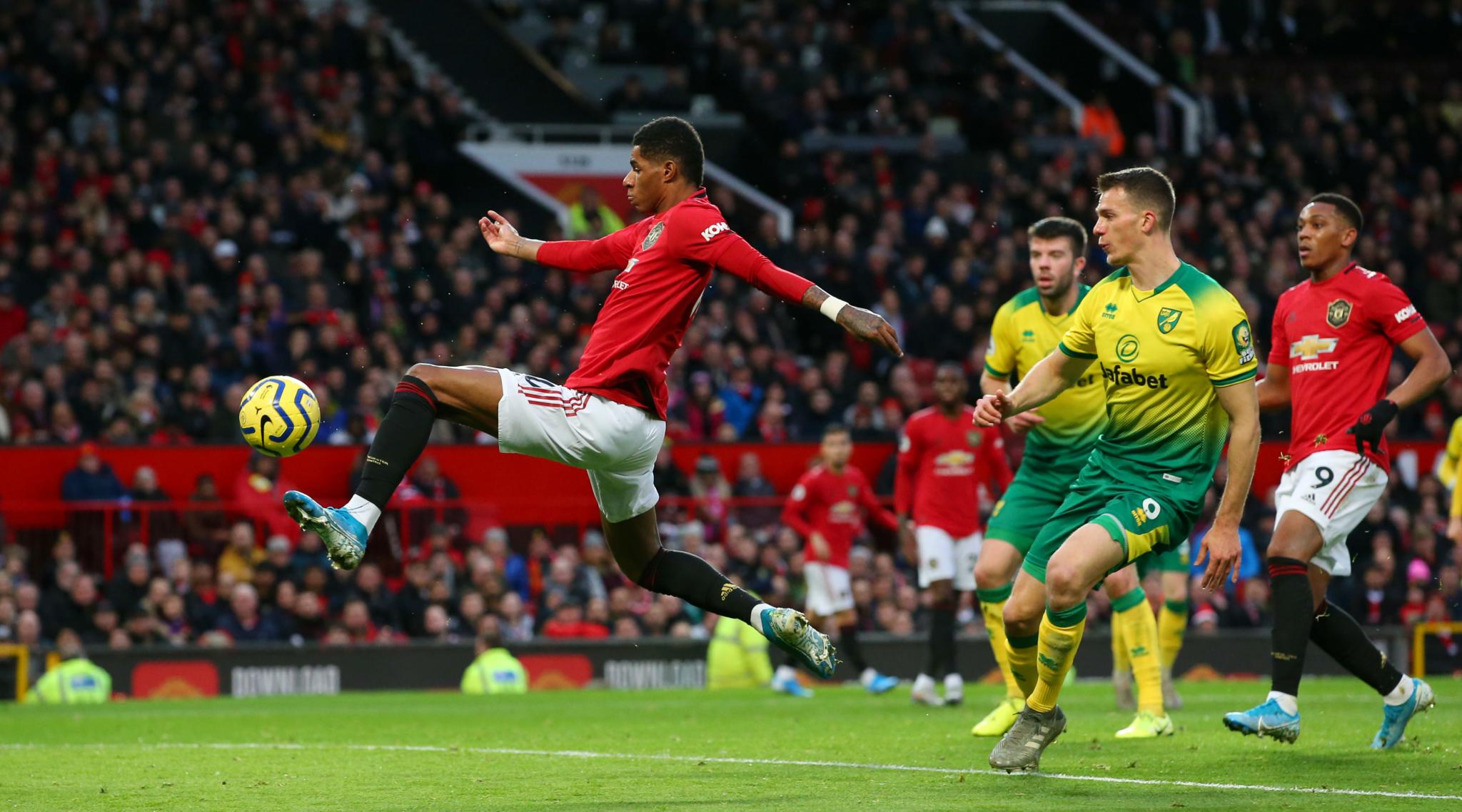 Manchester, January 12: Marcus Rashford marked his 200th appearance for Manchester United with two goals in a 4-0 win over Norwich on Saturday, leaving his manager Ole Gunnar Solskjaer predicting he can get even better. Anthony Martial and impressive teenager Mason Greenwood were also on the mark as Solskjaer's team maintained their hopes of qualifying for next season's Champions League through the league table.

But those prospects may depend on the continued fitness of Rashford, who was substituted after less than an hour and was declared doubtful for Wednesday's FA third-round replay with Wolves due to injury problems. Solskjaer admitted he will have to handle Rashford's fitness carefully and little wonder given that the 22-year-old has now scored 19 times in his past 23 games for United and England. Manchester United vs Norwich City, Premier League 2019–20 Match Summary.

"What an achievement, to get to 200 games at his age," said the Norwegian boss. "I don't know how many goals he has scored but he has 19 (for United) this season and he's been absolutely top class to work with. "He's a great kid, great attitude, he wants to learn, wants to improve but knows he has to keep his feet on the ground but is always available even though today he is carrying quite a few knocks. "He's played many, many games, I might have to look at how we manage him but of course he can get so much better. He's got everything to be a top-class player."

Rashford now has 64 goals in his United career, with the 63rd of those coming in the 27th minute after largely unrelenting home pressure, although the goal owed everything to a fantastic assist from Juan Mata. The Spanish playmaker received a long pass from Victor Lindelof and, after Todd Cantwell backed off a little too far, had the space to float in a perfect cross which Rashford volleyed in at the far post.

David de Gea was required to make a superb save late in the first half to keep their lead intact, diving well to claw away a curling shot from Cantwell. But that was a rare lapse from a United side that dominated for the bulk of the game and should have been enjoying a more comfortable cushion by the interval.

That finally came with two goals in quick succession early in the second half, with Rashford heavily involved in the first of those, playing a ball into the area for Brandon Williams to chase. The young full-back won a penalty after a rash challenge from goalkeeper Tim Krul.

United had missed four of their previous eight penalties this season -- two in their win at Norwich before Christmas -- but Rashford made no mistake on this occasion with a firm strike into the bottom right-hand corner.

The Reds did not have long to wait for a third as Williams played a quick, short corner to Mata whose cross was headed in brilliantly by Martial, who rose powerfully amid a crowded six-yard area to head firmly past Krul. It was the second assist of an impressive afternoon for Mata, with Norwich's outplayed midfield and immobile defence having no answer to his skill-set.

"When you get Juan facing forward he can pick those passes and put crosses in, he was excellent," said Solskjaer. Williams himself should have continued the rout moments later, missing an open net from three yards, before substitute Greenwood finally produced that fourth after 75 minutes, driving a left-foot shot past Krul from the edge of the area.