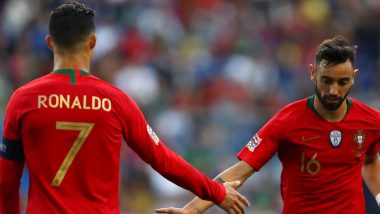 For the past few days, Cristiano Ronaldo's name has been associated with Manchester United. It is said that Ronaldo could make a dream comeback to United and the Red Devils could exchange him for Paul Pogba. Now the official account of Manchester United has posted a few pictures of Cristiano Ronaldo with Bruno Fernandes and the caption of the snaps had an equally interesting caption that actually added fuel to the fire. The caption of the snaps read, "Red suits them perfectly." This had added on to the speculation of Ronaldo's return to Old Trafford. Cristiano Ronaldo Transfer Update: Manchester United Owners Reportedly Hold Meeting With CR7’s Manager Jorge Mendes.

Ronaldo and Bruno are busy with national duties for not now and the two will soon be featuring in Euro 2020. In the picture we see the two donning Portugal shirts. But red also happens to be the colour of Manchester United. The netizens could not stop themselves from posting tweets about the same on social media, Cristiano Ronaldo fans in fact shared the tweet further and made it viral.

Check out the tweet below and the reactions as well:

Sancho on right ronaldo on left cavani up front and bruno behind them and rashford greenwood and martial on bench would be perfect. #mufc

United want him back

Both HV superb equation. If deal done means MNU win most of the trophies in this year 🥰😍 @ManUtd @ManUtd_Es

Cristiano Ronaldo has also been linked to PSG and it is said that the French Giant is also keen on having CR7 on board. In short, it would be an interesting summer for the five-time Ballon d'Or award winner.

(The above story first appeared on LatestLY on Jun 05, 2021 11:30 AM IST. For more news and updates on politics, world, sports, entertainment and lifestyle, log on to our website latestly.com).