According to Fabrizio Romano, the German club have no plan to offload the Belgian defender this summer. Earlier, it was learnt that the full-back was offered to Manchester United and the Premier League giants were considering for a move. 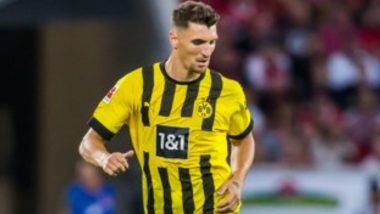 Borussia Dortmund director Kehl stressed that they have no intention to sell Thomas Meunier in this summer transfer window despite the player being linked with Manchester United for a potential move. According to Fabrizio Romano, the German club have no plan to offload the Belgian defender this summer. Earlier, it was learnt that the full-back was offered to Manchester United and the Premier League giants were considering for a move. Amid poor start to the Premier League season this year, Man United boss Erik Ten Hag is on the hunt of a versatile defender and has contacted with several top players across the European Leagues. Manchester United Transfer News: Atletico Madrid Reject Premier League Giants' Bid for Joao Felix

However, Ten Hag has preferred Diogo Dalot over Aaron Wan-Bissaka in the first two games of the Premier League 2022-23 Season. But the Portugal international has suffered a tough start to the season and is being considered largely unconvincing since joining the Red Devils four years ago. The uncertainty over Man United’s right flank has prompted a host of transfer rumours of right-backs in this transfer window, with Barcelona’s Sergino Dest among the players to be linked recently. The USA full-back earlier worked under the watch of Ten Hag at Ajax before leaving for Camp Nou in 2020. Christian Pulisic Transfer News: Manchester United Considering Loan Move for Chelsea Star

According to football journalist Fabrizio Romano, Manchester United were offered the chance to sign Borussia Dortmund full-back Thomas Meunier before the the German outfit's director Kehl ruled out the possibility of selling the Belgian this summer. The former PSG ace joined Dortmund in 2020 but any deal to bring him to Manchester will depend on the future of Wan-Bissaka, who has been under constant scrutiny. While talking about the possibilty of Meunier signing for United, Dortmund director said: We currently see no reason to sell Thomas Meunier. That's not in our plans." Many are of the view that Ten Hag is keen on reshuffling the United squad following two heavy defeats in the Premier League.

(The above story first appeared on LatestLY on Aug 18, 2022 11:51 PM IST. For more news and updates on politics, world, sports, entertainment and lifestyle, log on to our website latestly.com).