According to Marca, the Red Devils had made an unofficial bid for the Portuguese attacker, just to be denied by the Spanish club and the player himself. United have been busy in this summer window as they are trying hard to rebuild a strong squad. 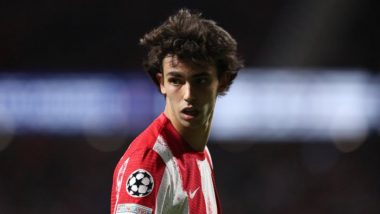 Manchester United once again failed to lure top European forward in in this transfer window as their recent £110 million bid for Joao Felix has been rejected by Atletico Madrid. According to Marca, the Red Devils had made an unofficial bid for the Portuguese attacker, just to be denied by the Spanish club and the player himself. United have been busy in this summer window as they are trying hard to rebuild a strong squad to go all guns blazing in the all competitions this season. However, they have not tasted much success in the market as many star players have rejected aa move to Old Trafford due to the club's miserable situation. Man United, having missed out on a UEFA Champions League spot, got off to a miserable start to the Premier League 2022-23 season with two consecutive defeats. Christian Pulisic Transfer News: Manchester United Considering Loan Move for Chelsea Star

According to Marca, Manchester United's sporting director, who is currently in Madrid, made a lucrative offer of £110 million to Atletico Madrid for their star forward Joao Felix. However, the Spanish giants ruled out the possibility of Felix leaving Wanda Metropolitano this season after rejecting United's bid. The 22-year-old ace attacker has £295 million release clause attached to his current deal with Atleti. The Red Devils are very much keen on bolstering their attacking options before the transfer window ends in September. And they want to pair Felix up with Cristiano Ronaldo despite uncertainty surrounding the future of the 37-year-old forward.  Manchester United Transfer News: Red Devils To Try and Sign Antony Before Transfer Window Closes

United have been linked with a bunch of forwards this summer including Mauro Icardi, Antony, Matheus Cunha, Jamie Vardy and Alvaro Morata. But, there has not been any breakthrough in any of these deals so far, with deadline day of the summer transfer window coming closer. Felix is not the only player Man United have been linked with in Madrid. Real Madrid's Casemiro has also been targeted by the Premier League giants as Erik Ten Hag's side look to give a new look to their midfield.

(The above story first appeared on LatestLY on Aug 18, 2022 03:34 PM IST. For more news and updates on politics, world, sports, entertainment and lifestyle, log on to our website latestly.com).