Manchester United Transfer News Update: Bruno Fernandes on His Way to Old Trafford for Medical Ahead of Potential Move

Fernandes had been heavily linked to United since June last year and was offered to the club in the 2019-20 summer transfer window but Old Trafford heads backed off while Tottenham Hotspur also refused to pay the asking price. United returned in January with significant interests and almost sealed the deal before Sporting CP increased the asking price for their club captain. 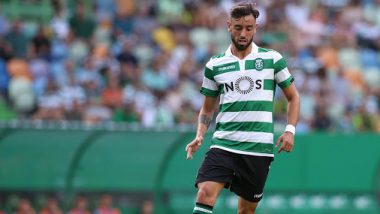 A transfer saga that almost outlasted the entire winter transfer window finally seems to have found a conclusion with Manchester United reported to have reached an agreement with Sporting CP for to sign midfielder Bruno Fernandes ahead of the impending deadline day on January 31, 2020 (Friday). Fernandes, who has been linked to the Premier League side since the summer, will sign a four and a half-year contract in an initial €55m deal that could rise to €80m with additional clauses.  The Portugal midfielder’s signing will come as a welcome relief for the United fans who have been running tensed and upset at the club’s struggle to forge a deal. Alexis Sanchez Will Come Back to Manchester United and Prove All Wrong, Says Ole Gunnar Solskjaer.

Reports in England stated that Fernandes could land at Old Trafford for a medical as early as Wednesday with agents of both parties meeting in Lisbon to complete the paperwork and announce Fernandes’ move to United within the next 24 hours. Sky Sports reporter and transfer guru Fabrizio Romano also confirmed that both clubs are close to agreeing to a deal and also inform that Fernandes might travel to the UK for the impending medical within the next few hours ahead of the official announcement.

Bruno Fernandes to Arrive At Carrington for Medical

Bruno Fernandes to SIC: “Premier League has always been my favourite destination”.

Man United are working also right now to complete everything and make him travel on next hours to UK with his agents for medicals and official announcement. 🔴🇵🇹 #MUFC #Bruno #ManUnited #transfers

Fernandes had been heavily linked to United since June last year and was offered to the club in the 2019-20 summer transfer window but Old Trafford heads backed off while Tottenham Hotspur also refused to pay the asking price. United – amidst an urgent need for new recruits to save the spiralling season – returned in January with significant interests and almost sealed the deal before Sporting CP increased the asking price for their club captain.

Bruno Fernandes is waiting and buzzing in Lisbon... and he’d be ready to fly to Manchester tomorrow with his agents if the total agreement will be completed on next hours. Talks on. 🔛🔴 #MUFC #ManUnited #BrunoFernandes #transfers

Since then talks between both clubs had reportedly stalled last week with Sporting CP refusing to lower their valuation for Fernandes and United not willing to pay €80m. The Old Trafford hierarchy had initially bid €45m with another €15m in add-ons. But FC Barcelona’s sudden interest in the player forced United to act quickly and seal the contract. News emerged on Tuesday that Barcelona plans to sign the 25-year-old Portuguese and use him as a makeweight in their pursuit of Valencia striker Rodrigo Moreno.

Reports claimed that with the situation changed United made two official bids for Fernandes, the second of which – a €55m initial upfront pay with €10m and €15 in add-ons – was accepted by Sporting. The first €10m add-ons are said to be performance-related while the final €15m will apply if United win the Premier League and Fernandes the Ballon d’Or title. He is expected to arrive in Carrington on Wednesday for his medical ahead of the potential move and could make his debut against Wolves in the Premier League this weekend.

(The above story first appeared on LatestLY on Jan 29, 2020 09:25 AM IST. For more news and updates on politics, world, sports, entertainment and lifestyle, log on to our website latestly.com).