Manchester United vs LASK, UEFA Europa League 2019–20: Mason Greenwood, Bruno Fernandes and Other Players to Watch Out in MUN vs LAK Football Match

Ole Gunnar Solskjaer was clear in his side’s aspirations when the team returned to action after a three-month break in June for the Premier League – qualify for next season’s Champions League and win some silverware. United have already achieved the first by finishing third in Premier League, which was sealed with a 2-0 win over Leicester City. 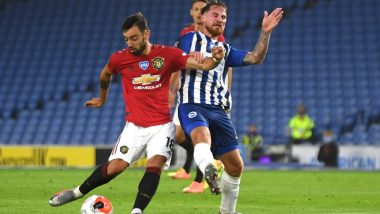 Manchester United will have an eye in the quarter-finals when they host LASK in the second leg of their 2019-20 Europa League round of 16 match on Wednesday. United lead the Austrian side 5-0 from their first leg and it will take a shock result to stop them from progressing to the quarters. The last time the Red Devils managed to reach the quarter-finals of Europa League, in Jose Mourinho’s debut season at Old Trafford in 2016-17, they went to win the tournament. Meanwhile, As United return to action after a 10-day break take a look at the key players for the Manchester United vs LASK clash. Manchester United vs LASK, UEFA Europa League 2019–20 Live Streaming Online.

Ole Gunnar Solskjaer was clear in his side’s aspirations when the team returned to action after a three-month break in June for the Premier League – qualify for next season’s Champions League and win some silverware. United have already achieved the first by finishing third in the Premier League, which was sealed with a 2-0 win over Leicester City on the final day. Now they aim for the second and will hope to finish their campaign with some trophy to show for it. Jadon Sancho Transfer News Latest Update: Manchester United Eye Federico Chiesa As Alternative Option to England Star.

The Nigerian striker, a boyhood United fan, would have returned to China and would have been part of the new season by now if not for coronavirus. But his six-month loan deal for Shanghai has now been extended until January. Ighalo has scored five times in 17 games for United, most of which have come as substitutes. He has found the net all three times that he has started. Ighalo opened the scoring against LASK in the first-leg in March and will be eager to add to the tally.

The 22-year-old Austrian international has been in fine form in the Europa League this season. With 5 goals in seven games, he is the top goalscorer for LASK in the competition and will be vital to the side if they are to overturn a 0-5 deficit at Old Trafford.

He is the joint top-scorer in the competition. Three of his six goals came when playing for Sporting CP and he has added three more to the goal tally since joining United in January. Fernandes has also assisted four times in the competition. He was instrumental in United qualifying for the Champions League and will once again be key to their Europa League aspirations.

Greenwood is United’s highest goalscorer in the Europa League 2019-20 with five strikes in seven matches. Greenwood is not expected to start against Lask as Solskjaer preferring to rest him with the tie almost sealed in United’s favour, who hold a five-goal advantage from the first leg.

(The above story first appeared on LatestLY on Aug 05, 2020 05:24 PM IST. For more news and updates on politics, world, sports, entertainment and lifestyle, log on to our website latestly.com).