The likes of Edinson Cavani and Donny Van De Beek, amongst others, could feature in Manchester United's playing XI and they would seek a repeat result from this match after they defeated the Londoners 2-1 in a thrilling Premier League encounter few days ago. 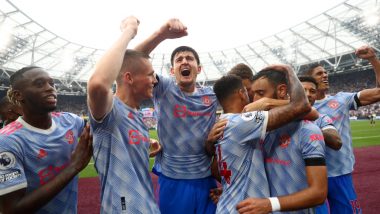 Following a thrilling win over West Ham in the Premier League last weekend, Manchester United are once again set to take on the London side in the third round of the Carabao Cup on Thursday, September 23. The match would be played at the Old Trafford stadium and would begin at 12:15 am IST (Indian Standard Time). Ole Gunnar Solskjaer's side played out a thrilling 2-1 win over West Ham in their last match in the Premier League with United keeper David De Gea producing a fantastic penalty save in the dying moments of the game. This match however is unlikely to feature top stars like Cristiano Ronaldo, Harry Maguire, Bruno Fernandes amongst others and Ole is expected to test out his bench strength in this fixture. That means that the likes of Donny Van De Beek, Dean Henderson and also Edinson Cavani (who has had his game time reduced following the arrival of Cristiano Ronaldo) could feature for the Red Devils in this clash. Cristiano Ronaldo Accused of Diving During West Ham vs Manchester United EPL 2021-22 Match (See Video and Reactions)

West Ham however, would be in search of revenge after they almost snatched a point against their rivals few days ago. David Moyes' squad received a boost with the return of Michail Antonio and West Ham are likely to include some of their top players in the starting XI.

Manchester United vs West Ham third-round match in Carabao Cup 2021-22 will be played at The Old Trafford stadium. The EFL Cup match will take place on September 23, 2021 (Thursday mid-night) and is scheduled to start at 12:15 am IST (Indian Standard Time).

Where to Watch the Live Telecast of Manchester United vs West Ham, Carabao Cup 2021-22 Football Match in India?

The Manchester United vs West Ham EFL Cup 2020-21 match will also be live on online platforms. Fans can log onto Voot Select to catch the live-action of the game either on the website or the app. Jio Users can also watch the game live on the Jio TV app.

(The above story first appeared on LatestLY on Sep 22, 2021 08:28 PM IST. For more news and updates on politics, world, sports, entertainment and lifestyle, log on to our website latestly.com).