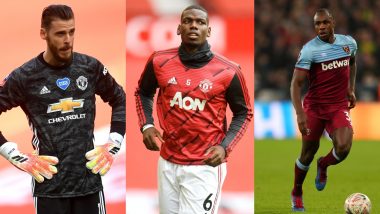 Manchester United will hope to forget the FA Cup disappointment and focus on the job ahead when they host West Ham United in Premier League 2019-20 on Wednesday. United were beaten 1-3 by Chelsea in their FA Cup semi-final meeting with goalkeeper David de Gea guilty of conceding the second and also allowing two more goals from the near post. Red Devils’ Manager Ole Gunnar Solskjaer also came under the pump for tinkering with an in-form squad and leaving out Paul Pogba from the starting XI. West Ham, on the other, have saved their season with vital wins over Watford and Norwich City. Manchester United Manager Ole Gunnar Solskjaer Defends Under-Fire Custodian David de Gea.

The Hammers, coached by former Manchester United manager David Moyes, will be eyeing their first league double over United having already beaten them 2-0 in the reverse fixture in September. West Ham have also won two of their last three Premier League games against United although both of those wins have come at home. We Were Not the Best Before and We Are Not the Worst Now, Says Manchester United Midfielder Bruno Fernandes.

At Old Trafford, the Hammers are winless in their last 11 meetings and haven’t won here since 2007. To end that streak and record a win they must overcome an in-form United side, who are unbeaten in their last 12 league matches and have won four of their five games at home. As both teams clash in their penultimate league game, take a look at some key players for the Man United vs West Ham match.

The Spaniard has come under severe pressure after some high-profile mistakes in the FA Cup semi-final against Chelsea. This is, however, not the first time that the United goalkeeper has made such mistakes. He has been prone to making silly errors for a couple of years now but at Wembley, on Sunday, it was catastrophic.

De Gea was to blame for all three goals United conceded in the semi-final. It will be a huge risk if Solskjaer still keeps him on goal against West Ham. But if he does, De Gea could be playing for his place against an in-form Michail Antonio.

The Portuguese looked tired against Chelsea at Wembley. But United still cannot risk resting him against West Ham in a do-or-die match. A win will still keep their Champions League destiny in their own hands and Solskjaer and United will hope Fernandes is at his best. The Portuguese has scored and assisted seven goals each in the Premier League since joining the club in January. He has also contributed towards 17 goals – most by any player in England since his debut in February - across all competitions.

The 30-year-old has been the most in-form striker since the Premier League restart in June. He has found the net seven times in his last five appearances, which includes a four-goal game against Norwich City. Antonio’s directness and physical play makes him a nightmare for defenders. He is West Ham’s leading goalscorer this season with 9 goals and will be eager to reach double figures and lead the Hammers to a memorable win at Old Trafford.

The Frenchman has been reborn as a striker under Solsjkaer. Martial has scored 17 goals in the league and 22 times across all competitions this season. His connection with Bruno Fernandes and Marcus Rashford has served United well at this stage of the season. Martial’s pace and dribbling ability, however, is the most devastating and he will want West Ham to get a taste of it.

Like Bruno Fernandes and most other regular United starters, Rashford looked worn out and out of ideas against Chelsea. He was equally wasteful and failed to perform as a striker. Solskjaer will hope he is back to his best in a must-win game against West Ham.

(The above story first appeared on LatestLY on Jul 22, 2020 04:32 PM IST. For more news and updates on politics, world, sports, entertainment and lifestyle, log on to our website latestly.com).