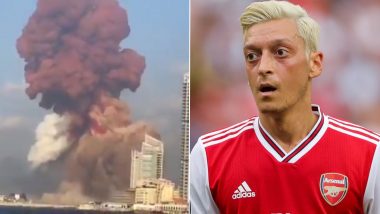 Mesut Ozil joined the sports fraternity in praying for the people of Beirut after a massive blast on Tuesday evening rocked the Lebanon capital and left the city in tatters. Over 100 people are feared dead from the explosion that took place at the Beirut port while thousands have been left injured amid the coronavirus pandemic crisis. Ozil took to social media to condole the death and also offered his support and love to the Beirutis and Lebanese people. The tragedy, at a time when the world is gripped with a pandemic, left people in shock. Beirut Blast: Virat Kohli, Yuvraj Singh, KL Rahul and Others from Cricket Fraternity Mourn the Horrific Incident in Lebanon.

A video, viral on the internet, shows moments when the blast takes placed and tears through the city. Ozil in a heartfelt message prayed for Beirut and Lebanon to rise again. “Still in shock. My support & love to the #Beirutis and #Lebanese 🙏🏼🇱🇧❤️ This is really hard, but I know you're strong and you will rise again. Keep hope,” said the Arsenal star in a twitter message. Lebanon Blast Caught on Camera: Terrifying Videos and Images of Explosion at Beirut Port Shared, Over 50 Dead So Far.

Still in shock. My support & love to the #Beirutis and #Lebanese 🙏🏼🇱🇧❤️ This is really hard, but I know you're strong and you will rise again. Keep hope 🤲🏼 pic.twitter.com/mnGjQijJIg

Many other footballers from the Premier League have sympathized with the victims of Beirut and have their support and prayers. Liverpool and Egypt star Mohamed Salah posted a pray for Lebanon message on Instagram. Manchester City player Riyad Mahrez, former Chelsea footballer Michael Essien also shared similar messages on their social media profiles.

(The above story first appeared on LatestLY on Aug 05, 2020 10:45 PM IST. For more news and updates on politics, world, sports, entertainment and lifestyle, log on to our website latestly.com).