The Glazer family, who are the owners of the club, are under heavy criticism after a disappointing 2021-22 Premier League campaign which saw United missing out on a UEFA Champions League spot in 2022-23 season. Knighton wants to submit a bid for a potential takeover of the English outfit. 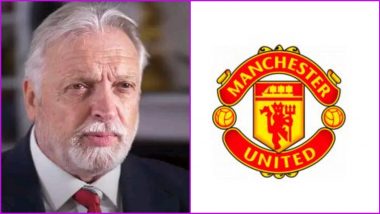 Michael Knighton, former director of Manchester United, has conformed that he is preparing bids to buy the English Club amid protests against the current owners. Knighton earlier came very close to take over the century-old football club in 1980. The Glazer family, who are the owners of the club, are under heavy criticism after a disappointing 2021-22 Premier League campaign which saw United missing out on a UEFA Champions League spot in 2022-23 season. Meanwhile, a seemingly failed transfer window fueled the protests against the Glazers. The United supporters are desperate for a change in ownership as early as possible.  Why is #EmptyOldTrafford Trending on Twitter? Here’s Why Manchester United Fans are Protesting Against Club Owners

Manchester United supporters have hit the road to demonstrate against the ownership of their beloved club. According to reports, the Manchester-based Premier League giants could see a financial crisis in near future because of mishandling of funds and salary structure. Fans are also furious at the Glazer family as they are of the view that the Red Devils are suffering in terms of forms and results under the Glazer ownership. Manchester United finished sixth in the Premier League last season and will play in Europa League instead of UCL. Thousands of fans orchestrated a wide-scale protest during the season opener of Manchester United against Brighton which prompted the club to shut down their megastore in the city. 'EmptyOldTrafford' and 'BoycottOldTrafford' are trending on Twitter as a part of the fans' protest against against the Glazers as it is understood that this could expand across the UK.

Meanwhile, Michael Knighton has revealed that he would submit a bid to take over the ownership of Manchester United from the Glazer family. During an interview with Man Utd the Religion, Knighton said: "Everyone knows that we need new ownership of this football club and that is my aim and those are my objectives. I am making good progress, continuing to talk to the people, I have got some good pledges and good finance." "We are now working on the offer document. Remember, it is a hostile bid - that simply means that the club isn't officially for sale. But my intention is to present these owners with a legitimate, potent and commercial offer to say: 'You have run out of road, it's time go, because your time is up," he added. The former managing director of the Red Devils also stressed that the Old Trafford must be renovated as the club needs to get back to its old glorious days.

(The above story first appeared on LatestLY on Aug 10, 2022 05:47 PM IST. For more news and updates on politics, world, sports, entertainment and lifestyle, log on to our website latestly.com).