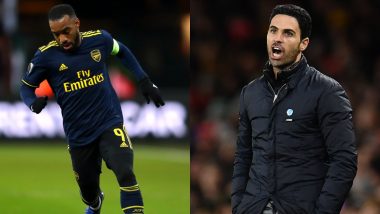 Arsenal boss Mikel Arteta has asked Alexandre Lacazette to play with confidence and consistently if he is to win his place back in the starting XI. Lacazette, who joined Arsenal from Lyon in 2017, has started just 15 times in 29 Premier League matches for Arsenal. The Frenchman has also lost his place to a young Eddie Nketiah of late and was left on the bench in the 0-3 defeat to Manchester City in midweek making four straight league matches where he has had to come off the bench. Rumours have also been rife that the club are willing to sell the Frenchman this summer to rebuild the squad. Brighton vs Arsenal, Premier League 2019-20 Free Live Streaming Online.

Arteta, however, put all such speculations to rest and praised the out-of-favour striker while also demanding more of him. "Alex is a player that I always liked because he's the type of striker that can do a bit of everything,” Arteta said ahead of the club’s trip to Brighton on Saturday. Brighton vs Arsenal Dream11 Prediction in Premier League 2019–20.

“He's very talented in combining and linking with other [players], his work rate and the way he competes for every ball is rare to find in a striker - and then he has the ability to put the ball in the net every time he's in front of goal.”

The Arsenal boss, however, added that Lacazette must prove his consistency to for a regular place in the team. "It has been a difficult season for him - for other players too - but we've been trying to manage that. He has a lot of continuity with me but he had that stroke where he was finding it difficult to score goals,” Arteta added.

Asked about what will be his suggestion for the 29-year-old, Arteta said he was waiting to see the Frenchman play with more confidence and aggression. “I just want to give him confidence, game time and the way he came on yesterday [in the 3-0 defeat to Manchester City] showed a lot of willingness to help the team and I am happy with him,” he said. “We have two strikers that have to fight for their places and I want that type of competition in the squad.”

"Everybody needs [confidence] and a striker probably more than any other player on the pitch because in the end, confidence is related to the amount of goals per minute they score. They can do everything well but at the end they're getting judged for the amount of goals they are scoring.”

Meanwhile, Arsenal travel to Brighton on Saturday winless in their last six league matches on the road. The Gunners find themselves ninth in the points table with 40 points after 29 games and eight away from the fourth place. They were off to a worse league restart losing 0-3 to Manchester City in their first match in over three months.

(The above story first appeared on LatestLY on Jun 20, 2020 05:56 PM IST. For more news and updates on politics, world, sports, entertainment and lifestyle, log on to our website latestly.com).