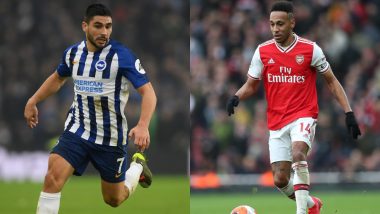 Brighton Striker Neal Maupay and Arsenal's Aubameyang Will Be the Players to Watch Out (Photo Credits: Getty Images)

Arsenal will hope to recover from their 0-3 bashing at the hands of Manchester City and return back to winning ways when they face Brighton & Hove Albion in the Premier League on Saturday. The Gunners had a worst possible return after a three-month coronavirus halt. Mikel Arteta’s side not just conceded thrice but also lost two players to injury and another to a red card in the 0-3 defeat to City. Their opponents, Brighton, are placed 15th in the points table and are just two points clear of the relegation zone. Meanwhile, fans searching for all the tips and team suggestions to pick the right Dream11 fantasy team, should scroll down. Aston Villa Captain Jack Grealish Charged Over Violating Multiple Driving Rules After Being Involved in Car Crash Amid COVID-19 Lockdown.

Brighton remains the only side in English top-flight still without a win in 2020. Graham Potters’ side have drawn three and lost six since the turn of the decade. But they will be confident against Arsenal having beaten them 2-1 in the reverse league fixture earlier this season. Arsenal will miss Callum Chambers and Cedric Soares both of whom are long-term absentees.

Granit Xhaka and Pablo Mari joined the treatment table after being forced off against City. Centre-back David Luiz is also suspended for two matches after seeing a red in the last game. Brighton have no such issues with Jose Izquierdo being their only injured player.

Brighton vs Arsenal, EPL 2019-20, Dream11 Team Prediction: Goalkeeper – Arsenal custodian Bernd Leno (ARS) should be picked as the goalkeeper for this clash.

Arsenal striker Pierre-Emerick Aubameyang (ARS) should be picked as the captain for this fantasy team. Bukayo Saka (ARS) or Neal Maupay (BHA) can be made the vice-captain. Both sides need a win badly to turn their campaign for good.

(The above story first appeared on LatestLY on Jun 20, 2020 01:13 PM IST. For more news and updates on politics, world, sports, entertainment and lifestyle, log on to our website latestly.com).